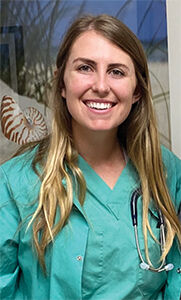 Victoria Nutting at a hospital in Fort Walton Beach, Florida, during her hospital training curriculum for medical school. 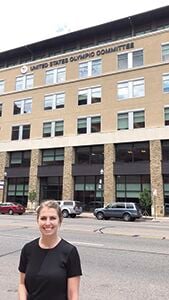 Victoria Nutting at a hospital in Fort Walton Beach, Florida, during her hospital training curriculum for medical school.

It has been a decade since twin sisters, Brittany and Victoria Nutting, were 'Queens of the Court' in volleyball in Hancock County. A lot has changed since they garnered All-State honors, led Hancock to the program's first Class III state championship, and Victoria was named Gatorade Player of the Year in Mississippi. Not to mention, both were outstanding in the classroom despite late hours of practice and competition.

The Nuttings both attended Texas A&M University where they continued their affiliation with volleyball working with the school's squad doing whatever was asked of them from filming practice, breaking down opponent film, performing metrics analysis for patterns and weaknesses, among many other duties.

Victoria has since turned her attention to medical school where she is entering her fourth year at Auburn University. Brittany entered the workforce and is employed with the United States Olympic Paralympic Committee in Colorado Springs.

The sport of volleyball, and sports in general, halve had a lasting impact on the Nuttings and how they have taken on life following high school.

Victoria commented, "All of medicine is a team effort. Everyone involved with a patient work towards a common goal. What I learned on the volleyball court early on with regards to teamwork laid a foundation that I carry with me today in my soon-to-be professional career."

Brittany continues to work with the very best athletes that the country produces. She stated, "At Team USA, we pursue excellence in every aspect. We hold ourselves to a high standard and we model that to all athletes. Those are key traits we learned early on in volleyball that still echo today with what we do which is to do the best job possible."

Sports teach leadership, teamwork, effort, and attitude. Anyone who has ever played a down, hit a kill shot, or swung a bat can attest to that. Those memories of days gone by and lessons learned remain with us throughout our lives.

Brittany stated, "Winning a state championship would be the easy answer to share when I talk about great memories. And, it is a great memory. But, what has stuck with me was all the hours spent in a gym training to be the best, the rides on a bus to take on an opponent, or just the time spent with teammates in any setting. Those are the times you bond and really become close with someone."

In a time when sports were taken from youth and fan alike, we all simply want it to come back to normal. But, will it?

Brittany commented, "During this time we are living in, I remember one thing my middle school basketball coach told us that I would share with any young athlete today - 'Don't cheat the drill'. If you cheat one time, it us easier to cheat again. Then, before you know it you are looking for the easy way out with everything. Doing things the right way and completely makes us a better society."

Victoria added, "Every experience is fleeting so I would ask young athletes today to cherish the time they have on the court, in the field, with their teammates. We know now what it feels like to have it taken away. Hard work and commitment are the only ingredients to success. Sports are a great example of that. Nobody wins a state title without hard work."

The virus has taken away time from not only the young athlete but the professional athlete, as well as, the fans. We are aching for an outlet.

Victoria ended, "Of all the demographics out there hurting from this pandemic, the most hurt are the youth. This time in their lives is a key time of development - physically, socially, psychologically, etc. The pandemic has taken that outlet of learning away. We need to get back to doing what we used to do because our youth, the future, is missing out on development in so many aspects."

Brittany ended, "Team USA us moving forward with the hope that Tokyo 2020 will happen in 2021. The athletes have endured monumental changes with regard to the virus but Team USA is trying to get the athletes back to a normal setting as quickly as possible."

Brittany and Victoria Nutting spent countless hours at the gym perfecting their game, leading their team, and learning how to do the best job possible. This is what athletes learn. This is how they succeed. Let's hope this time away from the fields and courts of play have not hindered proper growth and development of our future leaders.