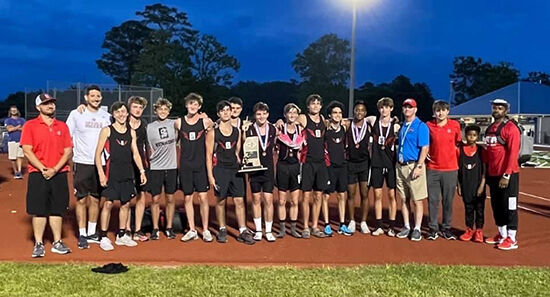 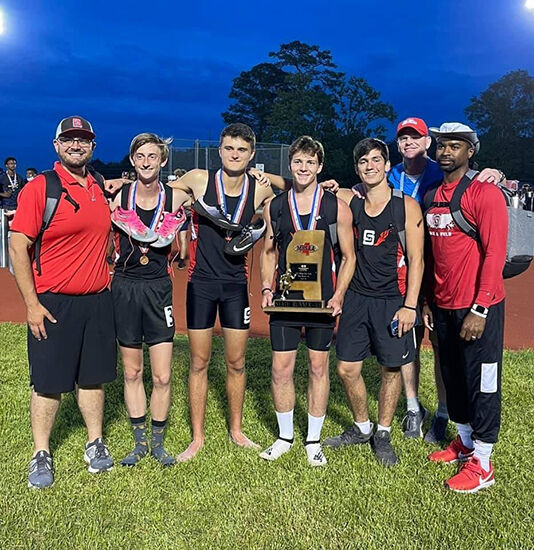 The high school track and field season for Bay High, Hancock, Pass Christian and Saint Stanislaus came to a close on Saturday at Pearl High School.

The 2A-4A-6A state meet was held under sunny skies and warm Temps. The 1A-3A-5A state meet, which includes Our Lady Academy, will be run on Thursday due to inclement weather this past Friday.

The Rocks traveled to Pearl with great expectations of their 15 entries in the championship meet after having won the Division 8-4A, Region 4-4A, and Class 4A South State titles in convincing fashion.

Of the roster that was brought to Pearl, only two members had ever been to 'Tracktown Mississippi' before, so it was an eye-opening experience. The team ended the season with two state titles and seven medals.

The Rocks squared off with 4A North Champion Pontotoc High School that sported 21 entries in the meet along with 24 other teams.

He also led off the silver medal winning 4x800m relay Carson Leverett, Gabe Sandoz, and Gus Breisacher which recorded a time of 8:47.46.

Ryan Tyler collected a silver medal in the discus with a throw of 128' 8".

Chandler Chapman brought home a bronze medal in the 300m hurdles with a time of 41.52.

Chapman also led off the bronze medal winning 4x100m relay with teammates Nour Tayara, Canye Bankston, and Ja'Kobe Cameron in a time of 43.89.

The 4x200m relay team of Chapman, Kitto, Bankston, and Cameron also brought home bronze with a time of 1:31.68.

The 4x400m relay team of Andrew Mayer, Christian Kitto, Evan Noel, and Sandoz turned in a season best time of 3:38.05 to placed third and gather the bronze medal.

It was the first time in school history that all four relay teams medaled at the state meet.

Kitto rounded out the scoring with a fourth place finish in the pole vault with a height of 11' 6".

It was a historic year for SSC in track and field as the team won the division, region, and South State titles in the same year and then just missed on the program's first state title. With a solid core returning for next year, the Rocks bid a fond farewell to their seniors led by Gabe Sandoz, Jacob Hanlon, Andrew Mayer, Nicholas Toepfer, Christian Kitto, Nour Tayara, Trustin Northington, William Trapani, Ryan McClellon, and Liam Flickinger.

The Pass Christian Pirates brought home two medals from the state championships. Thomas Carter led the Pirates with a silver medal performance in the pole vault with a height of 13' 6" while Montrell McGowan took home bronze in the high jump with a height of 6' 4".

The Bay High Tigers brought home a bronze medal when Terron Bedford took third in the shot put with a throw of 46' 1 1/4" followed by teammate Devin Gaspard in fourth with a throw of 42' 10".

Hancock did not have a participant in the boys Class 6A meet.

On the girls side, the Pass Christian Lady Pirates scored 48 points to finish fourth in Class 4A behind champion Raymond with 80 points. Bay High scored five points to finish tied for 23rd in the field of 31 teams.

DeFelicibus brought silver in the pole vault with a height of 9' while teammate Newman was third withba height of 8' 6".

Bell brought home bronze in the high jump with a height of 5'.

Other performances included a fifth place finishnin high jump by Haleigh Haynes with a height of 5' and a fourth place finish in the triple jump by Chanel Howard with a leap of 35' 2".

Karly Wilson was the lone performer for the Lady Hawks of Hancock and finished eighth in the 800m run with a time of 2:31.12.

The Class 6A girls team title was collected by Clinton with 137 points while the 6A boys title was claimed by Pearl with 95 points.

OLA will compete on Thursday in the 1A-3A-5A state meet at Pearl High School.