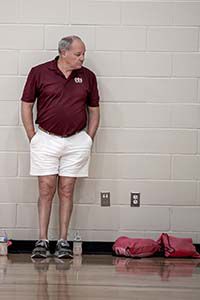 LA head coach Mike Meyers ponders on the game quietly at a tournament in 2019. 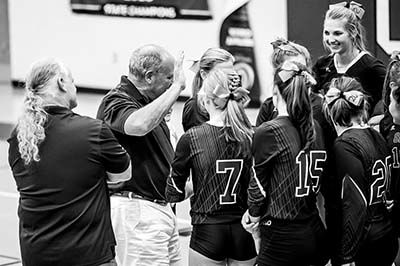 LA head coach Mike Meyers ponders on the game quietly at a tournament in 2019.

Longtime OLA volleyball coach Mike Meyers recently announced to his players that he was retiring from coaching the sport that he made his own throughout the state of Mississippi.

The mascot of Our Lady Academy is a crescent moon which is always a rising moon; however, there always comes a point in time when these celestial objects we adore must set. And, for perhaps the most successful and well-known volleyball coach, regardless of classification, the time has come for Mike Meyers.

He stated, "I feel very fortunate to have had the opportunity to coach at OLA for the last 20 years and get to work with the incredible young ladies who have made our program so successful. They recognized what we were trying to accomplish, totally bought in to the program and have established a tradition second to none. I will always be indebted to these young ladies for their hard work, dedication and loyalty to OLA Volleyball and to me. What makes it so satisfying is that their on-court success pales in comparison to what wonderful young ladies they are."

He added, "There are way too many people who have helped make our success possible to try and mention here, but I would be remiss not to acknowledge Coach Steve Reboul who has been my good friend and assistant coach through all the years. Thank you to all who have been a part of our program. And with the young ladies who are in our program today, the future is bright. It has been really fun to watch Mississippi volleyball grow from one class in the early years to play in six classes next year. It is the fastest growing sport in Mississippi. This is certainly a bittersweet decision, but I will be their biggest fan, and I look forward to having more time to spend with my two grandsons, just like I was able to do with my daughters."

Meyers took over the OLA volleyball program in 2000 after watching a game his oldest daughter, Emily, was playing in. What he saw was not necessarily volleyball but an opportunity to effect a change in the lives of the girls who played it. And, shall we say the rest is history.

A brief background of Meyers gives one a look into what made Meyers the coach that his players feared, respected, understood, and, most of all, loved.

Meyers is a 1969 graduate of Saint Stanislaus College where he was the salutatorian of his class. He was a standout football player who also was a state champion in the shotput for the track and field team. His best mark of 54'6" remains the school record at SSC today.

Following graduation, Mike signed a scholarship to play football at Louisiana Tech University where he was a teammate of NFL Hall of Fame inductee Terry Bradshaw.

Meyers was a two-year starter for LA Tech and then remained as a graduate assistant coach for a year before he embarked on a highly successful high school coaching career in football and baseball in the Baton Rouge area for a little over a decade.

But, once a coach, always a coach. And, he saw a need at OLA when his daughters - Emily and Amanda - were at the school.

So, in 2000, he took over the reigns of the volleyball program without all the ins and outs of the sport. He called coaching contacts in Louisiana for pointers and insight where the sport had been flourishing for years. It did not take long for the coaching bug to bite Meyers again and he was all in.

In 2000 volleyball was a fledgling sport in the state and all schools competed against each other no matter the size of the school.

Meyers led the Crescents to the division title and the state playoffs for the first time. The next year, 2001, Meyers and his squad repeated as district champions and eventually played in the state title game where they fell to Tupelo and finished as state runner-up.

In 2002, Meyers and his Crescents broke through the glass ceiling as somewhat of a Hoosiers reincarnation beating Southaven for what would be the final overall state championship in volleyball. That was the first state championship, but there would be many more to follow.

Uncertainty surrounds the 2020 football season, but Wyoming is cautiously optimistic

Last year there were over 450,000 girls playing volleyball in the United Stated and it is still growing. In fact, it is the fastest growing sport in the country, regardless of gender.

At OLA, the Crescents played volleyball the Mike Meyers way and it delivered results on and off the court. His oldest daughter, Emily Meyers Corley, who serves as the school's Athletic Director, commented, "My dad made a huge impact on those of us who were lucky enough to play for him. He instilled a drive to be your best self on and off of the court. He taught that you have to not only work hard but to plan a path for your goals. Through his work ethic for the volleyball program he created a sense of pride in each girl and a sense of pride for OLA.  I am not only proud to be his daughter and to have played for him but also to have coached with him. He is intense but the most kind and caring person you will meet. We will miss seeing my dad and Mr. Steve Reboul on the bench but I know and they know that once a Crescent, always a Crescent."

During his time at OLA, Meyers was always quick to answer that he had great players which made winning much easier. But, they were not great players to begin with. It took time to hone their skills and develop within the state's greatest dynasty regardless of sport.

Just two short years later, this past season Rebecca Walk, who also never lost the last game of a season, was named an All-American by PrepVolleyball after leading the nation in kills (883) and hitting percentage (66%)

There have only been three All-Americans in volleyball in Hancock County history and he coached two of the them.

Meyers always was keen on preparing the girls for life off the court and parents were very appreciative of the big picture he taught them.

KK Walk, mother of five-year starter and All-American Becca Walk, commented, "Mike has been an amazing coach for these girls on so many levels. He not only teaches them the value of team work on he court but in life as well.  He has been a blessing to every girl he has coached!"

The biggest lessons Meyers taught the girls on the court had nothing to do with the sport. He taught them how to prioritize goals and have a plan for later when the court is not around. His effect on his players reached beyond the court. That is a true coach, in every sense of the word.

His most recent star on the court Becca Walk, a South Alabama signee, stated, "Coach Mike has taught our team countless lessons not only about volleyball but about life that we will take with us outside of high school.  We have been so blessed to have him as a coach throughout our high school years."

While this Crescent that is Mike Meyers is setting on OLA volleyball, there is no person in the state that can argue or debate the influence that Meyers has had on the court and beyond. His star burns eternal in the Father Peter Mockler Gymnasium which is the "House that Mike Meyers built".

There is only one thing left to do and that is give that court a name. And, I know the perfect one that bridges the school to the community to the mission. It is two syllables and won't take much paint.

Congratulations, Mike, on a career that has risen and will never set!