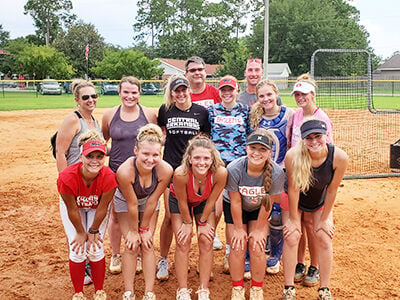 The U-18 Germantown Red Devils. 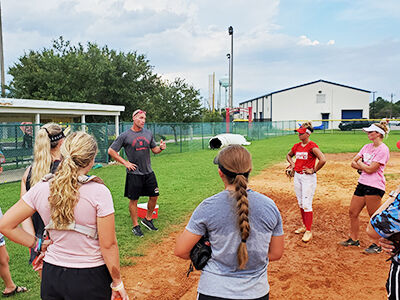 SSC head baseball coach and former Mississippi State All-American Brad Corley speaks to the U-18 team about playing at the next level.
1 of 2

The U-18 Germantown Red Devils.

SSC head baseball coach and former Mississippi State All-American Brad Corley speaks to the U-18 team about playing at the next level.
Correy Gex, a native of Bay St. Louis and 1996 graduate of Saint Stanislaus, has always remained close to his hometown even though he has lived in the Memphis suburb of Germantown since he graduated from Ole Miss in 2001.
Gex, who works in the freight and shipping industry, left Bay St. Louis after a decorated three-sport career at Saint Stanislaus when he signed to play football for The University of Mississippi.
While at Ole Miss, he met his future wife, Amanda Fine, who is a decorated athlete herself. Fine was a nationally ranked softball star and signed with Ole Miss where she threw the first pitch in the program's history.
Together, they have three daughters - Josie, Ginny, and Joanna.
Each summer since the girls have been playing softball, Germantown has come to the Coast for a tournament. Gex serves as President of the Germantown Softball Club. This year the club sent four teams to Gulfport for the National Softball Alliance national championship tournament.
Correy Gex spent the majority of the week of July 13-19 watching the club's four teams compete while Amanda Gex coached the U-18 team that was comprised of 11 Division-I commits or signees including their oldest daughter, Josie, who has committed to Bryant University in Rhode Island.
Their middle daughter, Ginny, plays for the U-14 team and Joanna plays on the U-10 team.
The U-18 Germantown Red Devils came down on Sunday evening and Correy Gex contacted a former rival who he stays in touch with and a former teammate, Bay High head softball coach Wali Shabazz and Bay High head girls basketball coach Kelton Thompson, who helped arrange a field for the U-18 team to practice on Monday, July 13th. Shabazz also went out to help the team practice in the outfield.
Head coach Amanda Gex put the team through a grueling practice before the tournament started. At the end of the practice, Correy arranged for Saint Stanislaus head baseball coach and former All-American at Mississippi State Brad Corley to come talk to the team about playing at the next level.
On Tuesday, Corley gave hitting lessons to several of the team members along with Braxton Lee of the New York Mets.
The team was comprised of Morgan Nelson (Bentonville, AR - Freshman, Central Arkansas), Gabbi Scott (Bentonville, AR - 2020 Central Arkansas signee), Katelynne McMahan (Little Rock, AR - 2020 Central Arkansas signee), Savannah Talley (Marion, IL - Freshman, Chattanooga State CC), Hannah Nalley (Marion, IL - 2020 Louisiana-Lafayette signee), Lauren Lester (Little Rock, AR - 2020 Quatitah Baptist signee), Neely Taylor (Marion, AR - 2022 recruit with interest from Oregon, Virginia, North Carolina, Georgia Tech), Lexie Griffin (Atoka, TN - 2021 recruit with interest from Christian Brothers, Lynn College, Delta State), Josie Gex (Germantown, TN - 2021 recruit committed to Bryant University), Mikayla Stinnett (Mumford, TN - 2022 recruit), and Kennedy Foote (Birmingham, AL - 2020 Western Kentucky signee).
Head coach Amada Fine stated, "We played well throughout the tournament. The girls played deep into the tournament but we got a tough draw. We beat some good teams, but in the end it took some time to gel and really get going. It’s great to see such talented kids get out there and compete and have fun before heading off to some high level college programs where the pressure is immense.  We really wanted to allow them to enjoy the game and have fun one last time before it becomes a business for them."
Despite not advancing to the finals, Gex and his Germantown Softball Club teams enjoyed their trek to the Mississippi Gulf Coast for a week on the diamond and experiencing all the Mississippi Gulf Coast has to offer even during a pandemic.