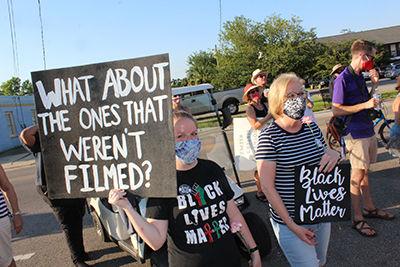 With chants of “Unity in the Community!” and “No Justice, No Peace!” the 100 Women DBA took to the streets of Bay St. Louis on Friday for the first-ever Women for Progress March.

The march “was a peaceful protest about the killing of Black people,” Rachel Dangermond — director of the 100 Men Hall and founder of the 100 Women DBA said in a statement before the event. “As Hancock County women, along with the men who support us, we are marching against all acts of oppression and use our voices for those who are not heard, whose lives have not mattered, and who every day suffer at the hands of people in power who do not represent or uplift them.”

More than a hundred people gathered at the 100 Men Hall on Union Street in the Bay before the event, where photographer Ann Madden offered free family portraits to Black and biracial families.

Then the group — a multi-racial, multi-age coalition of men and women on foot, bicycles and golf carts — began the march from the hall to Necaise Avenue, to Main Street, traveling all the way down to the Hancock County Courthouse.

At the courthouse steps, Dangermond thanked everyone for attending and urged them to keep striving for racial harmony and the end of oppression. She also credited Madden for her incredible work on behalf of 100 Women DBA.

Other speakers at the event included Nicole Eley-Fairconeture, who spoke on the generational horrors of racism in America.

“My daughter was recently the victim of a racist incident,” she said, before speaking of her grandmother, who recently died in the midst of racial unrest across the country in the wake of the murder of George Floyd.

“My grandmother already went through this before and she had to close her eyes with this going on,” she said. “It’s too much.”

The 100 Women DBA is a program under the auspices of 100 Men Hall seeking to levy the members collective privileges and blessings to level the playing field for under- represented women to empower and support them in their business endeavors. For more, checkout the 100 Men Hall on Facebook, or check outage Women for Progress March by 100 Women DBA on Youtube.com.