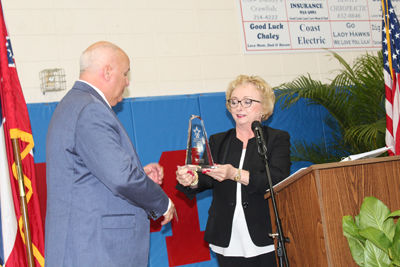 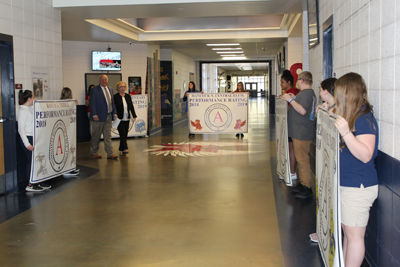 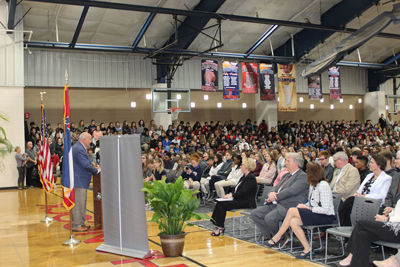 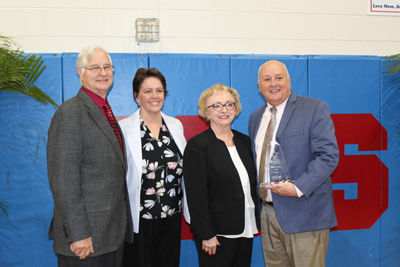 HCSD Superintendent Alan Dedeaux said that it was a "special" day for the district.

"What we're celebrating today doesn't just happen by accident," he said. "It takes a lot of hard work and dedication from a lot of people. It takes everyone in our district working together to accomplish this achievement."

Dedeaux also recognized all the district's administrators and teachers.

"I would also like to acknowledge the most important group that we have here today is our students, for your hard work and your accomplishments," Dedeaux said.

Wright said that Wednesday marked her first visit to the HCSD and this was the district's first time earning an "A." The HCSD is one of 31 districts in the state that earned an "A" rating last year.

"Earning an 'A' as a district or a school is even more important because it sends a very powerful message to your community and to the businesses in your community that let them know that your children are getting the best education possible and in some of the finest schools that Mississippi has to offer," she said.

Wright told the students that education is one of the "most critical parts of your life."

Wright spoke about some of the similarities the top districts share, including a focus on instruction and using data to make decisions.

"But one of the things I think is most fascinating, I see schools and districts that have huge community support," Wright said. "And that does not go unnoticed by me at these events. Parents can't do it alone, schools can't do it alone, but when you come together to form that special kind of partnership, it's amazing what you can get accomplished in schools and that's what you have here in Hancock."

Wright told the students she was proud of them and encouraged them to continue working hard.

"Those people that work hard get a lot more opportunities in life than those that don't," Wright said.

She also told students that they are "changing the history of education in Mississippi."

"We have never seen achievement across the state this high," she said.

Wright spoke about her recent visit to Washington D.C., where she learned the results of the most recent National Assessment of Educational Progress.

"It is the only test that is administered in every single state in the U.S. and it's administered every other year in reading and in math to fourth grade and eighth grade," Wright said. "What makes this test unique is that we don't have any control over it, each state department has no control of it. I literally get a letter from the National Assessment Board that says 'we're coming to Mississippi, here are the districts we're coming into, not all, here are the schools we're coming into, not all, here are the students that are going to be tested, not all, and here are the subjects that we're going to test them in. So it is literally a random assignment of school districts."

Officials come from Washington D.C. to administer the test, she said.

Wright said that Mississippi's fourth- grade reading and math gains ranked "number one in the nation."

"So that means that Mississippi's fourth- graders scored higher than every other fourth grader in the nation for their gains," Wright said. "That's not insignificant information. That's the new story in Mississippi. Every single measure we are monitoring right now is headed in the right direction. Every single measure. There's not another state in the nation that can say that. And that's because of your hard work. Because of the hard work of students and teachers and leaders starting from the top, all the way around this state."

Wright said that Mississippi was the only state in the nation to show gains in three of the four areas, and maintained in the fourth.

"That tells you that you're getting the best education you could possibly be getting right here in Hancock County," Wright said. "And that's something to be very proud of. We are in the nation's eye for education and it's because of school districts like Hancock, the teachers and leaders and students here at Hancock. So I am encouraging you to always put your best foot forward because the best is yet to come."