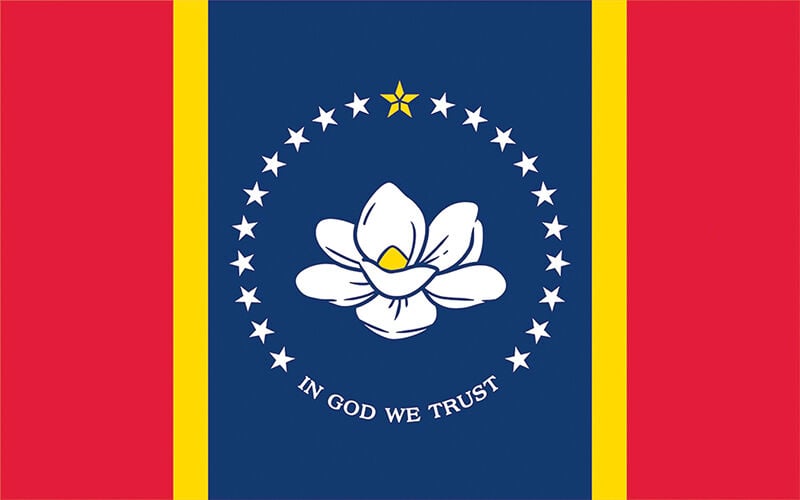 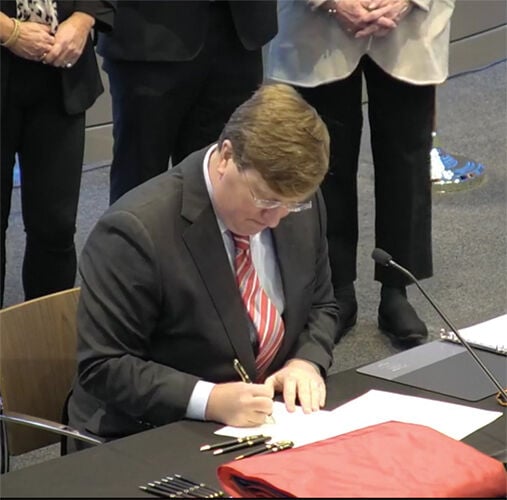 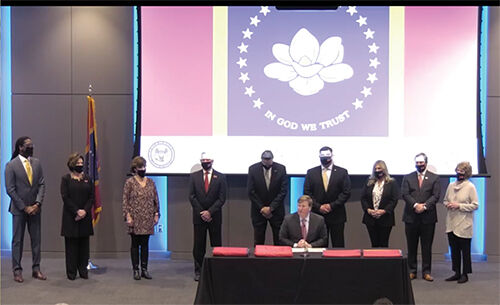 Gov. Tate Reeves on Monday signed House Bill No. 1 into law, which ratified the state’s new state flag, “In God We Trust.”

At the signing of HB 1796 last year, Reeves said that he understood the need “to commit the 1894 flag to history, and find a banner that is a better emblem for all Mississippi. There is a difference between monuments and flags. A monument acknowledges and honors our past. A flag is a symbol of our present, of our people, and of our future. For those reasons, we need a new symbol.”

After retiring the 1894 flag, legislators created the Commission to Redesign the Mississippi State Flag, which gathered ideas from the public, hosted open meetings, and conducted polls prior to selecting the new design, which includes a magnolia surrounded by stars with the words “In God we Trust,” a release from the Mississippi Department of Archives and History states.

The majority of Mississippians voted in favor of the new flag on Nov. 3, 2020.

“Today, I signed the bill to ratify a new banner for our state,” Reeves said Monday. “It is done with the hope that we can work together and serve one another. We need to come together in this country.”

Reeves, along with Lt. Gov. Delbert Hosemann, and House Speaker Philip Gunn on Monday also led a flag-raising ceremony on the grounds of the Mississippi State Capitol

“From our world-famous authors to the unmatched beauty of our natural resources, Mississippi has always been a place with limitless potential,” Hosemann said in a release. “In ratifying the peoples’ vote and in raising this new banner, we are signaling to the rest of the world we are ready to realize this potential, we are open for business, and we are living up to our welcoming reputation of hospitality. Today, we take a great step toward making Mississippi an even better place for our children and grandchildren, and for this I could not by any more proud.”

“As I talked to people who voted for changing the flag, one question motivated them: ‘Will I be able to look my children and grandchildren in the eyes and be proud of my vote?”’ Gunn said in the release. “Mississippians answered them loud and clear, once and for all. With an astounding majority, we as a state were united in showing the world that we choose to stand on the right side of history. This new flag boldly declares our trust in God, as a state. As we enter into a new year, a new session, may God bless our efforts, and may God bless the state of Mississippi as we set sail under this new flag.”