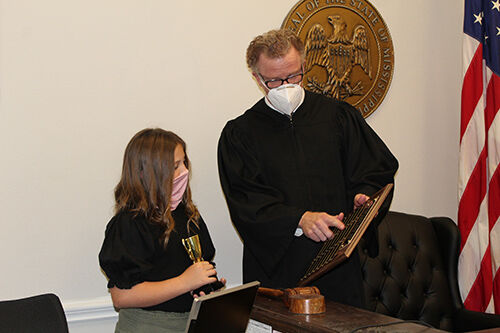 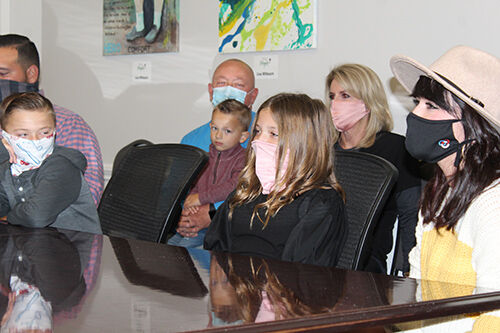 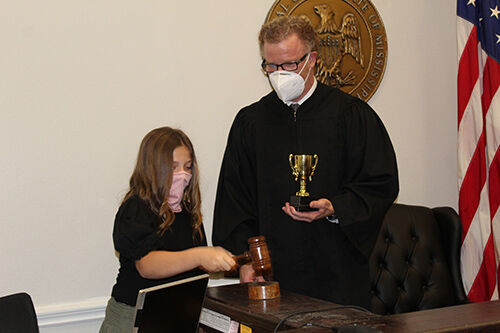 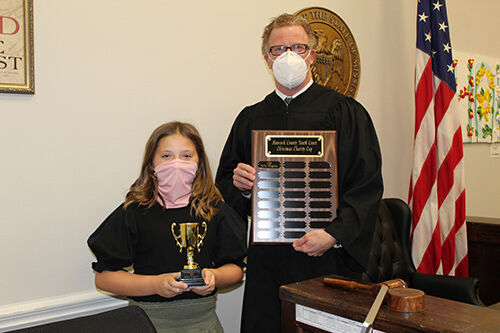 The Christmas Cheer Cup was established to recognize an individual in the community who supports “the youth, the children, the needy in Hancock County,” Favre said.

A few years ago, Millie started “Millie’s Movement” in an effort to raise funds to purchase toys for children who were in need.

“It’s just grown over the years,” he said. “It started with selling wrist bands to raise money and the community has kind of gotten behind her to support the project and it’s grown and grown and grown.”

Favre said that he usually deals with delinquent children and he said he feels it’s important to recognize “kids that are doing great things and inspiring others to act.”

“If we had more Millies around, we could move mountains,” Favre said.

Millie received a trophy and her name will be added to a plaque.

During the presentation, Favre said that Millie has “risen above her classmates, her peers, and been an example to other people, including myself, of what it means to be a part of a community; to help others; and to make Christmas special for children who don’t have all the things that we’re blessed with.”

“Millie Brignone has demonstrated abounding compassion, dedication, and generosity for the children of Hancock County and across the Mississippi Gulf Coast,” Favre said. “Further, she has inspired many other children to do the same. The Hancock County Youth Court commends and thanks Millie Brignone for her exceptional service to the children of Hancock County, Miss. and across the Mississippi Gulf Coast through her creation of and dedicated service to Millie’s Movement.”

At first, Millie said, she did not know why her parents, J.C. and Blair Brignone, were bringing her to the youth court building.

“They told me that ‘maybe you’re going to see Santa,’’’ Millie said. “I did not expect this.”

Millie said she got “nervous” when Judge Favre first walked in, but that soon changed.

“I was very, very happy and glad that people think it’s great I’m doing what I’m doing,” she said.

This year, despite the limitations the pandemic placed on her fundraising efforts, Millie raised about $15,000.

Since the inception of Millie’s Movement four years ago, more than 1,000 children in need have received Christmas cheer.

Millie said that she was “excited” to be the first to receive this award.