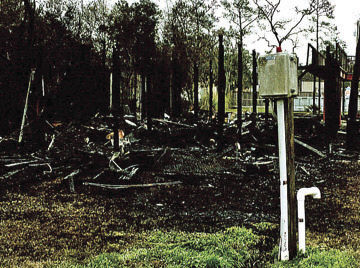 Authorities believe a 72-year-old man died in a blaze at his Cuevas Town Road home early Wednesday morning. Hancock County Coroner Jim Faulk said the man's family has been notified, but his identity will be confirmed with a DNA test. 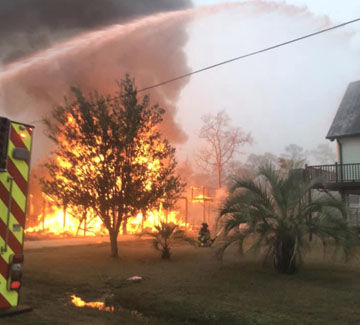 This home in Bay St. Louis was a total lost after a fire on Tuesday.

One person was killed in a fire that spread quickly early Wednesday morning, consuming the camper trailer he lived in.

The fire was reported at 6:35 a.m. in the 8000 block of Cuevas Town Road in north Hancock County, according to Hancock County Emergency Managment Agency Director Brian “Hootie” Adam.

Firefighters arrived to find flames and smoke shooting from the home, Adam said.

Although a positive identification has not yet been made, Faulk said the man who is believed to have perished in the fire was a 72-year-old Edward Savoy Sr.

“We will confirm his identity through DNA testing,” Faulk said. “His son has been notified.”

Adam said this is the third house fire so far this year in which the home was totally destroyed.

On Tuesday, a home in Bay St. Louis burned to the ground. No injuries were reported.

Exactly one week ago today, on Wednesday, Jan. 8, a Diamondhead home went up in flames and burned to the ground just before 5:30p.m.

No one occupied that home at the time, Adam said.

The causes of all three fires have yet to be determined.

“They are both very active investigations,” Adam said.