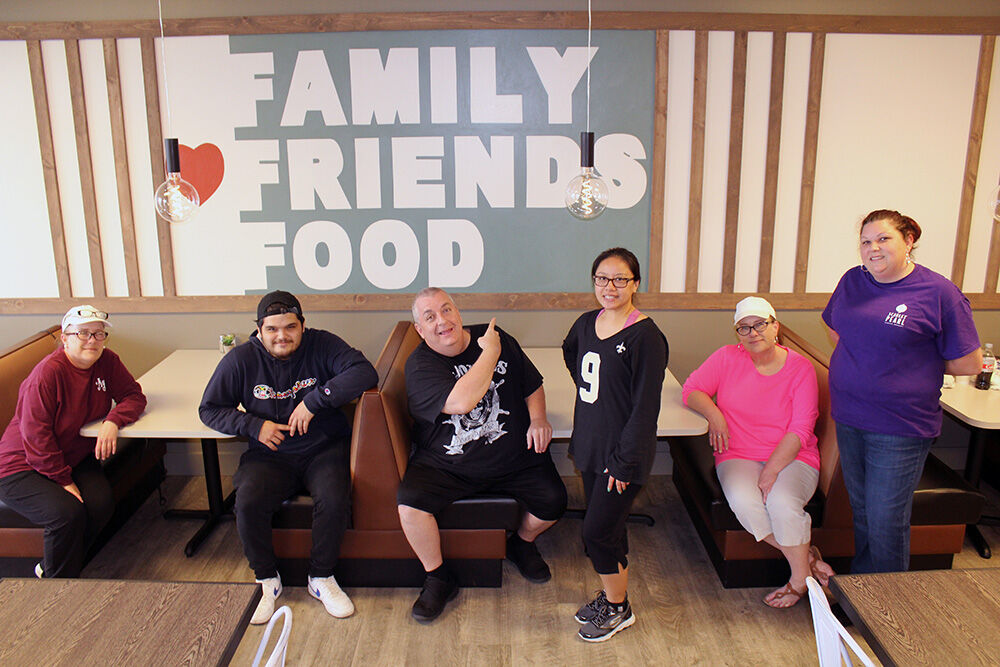 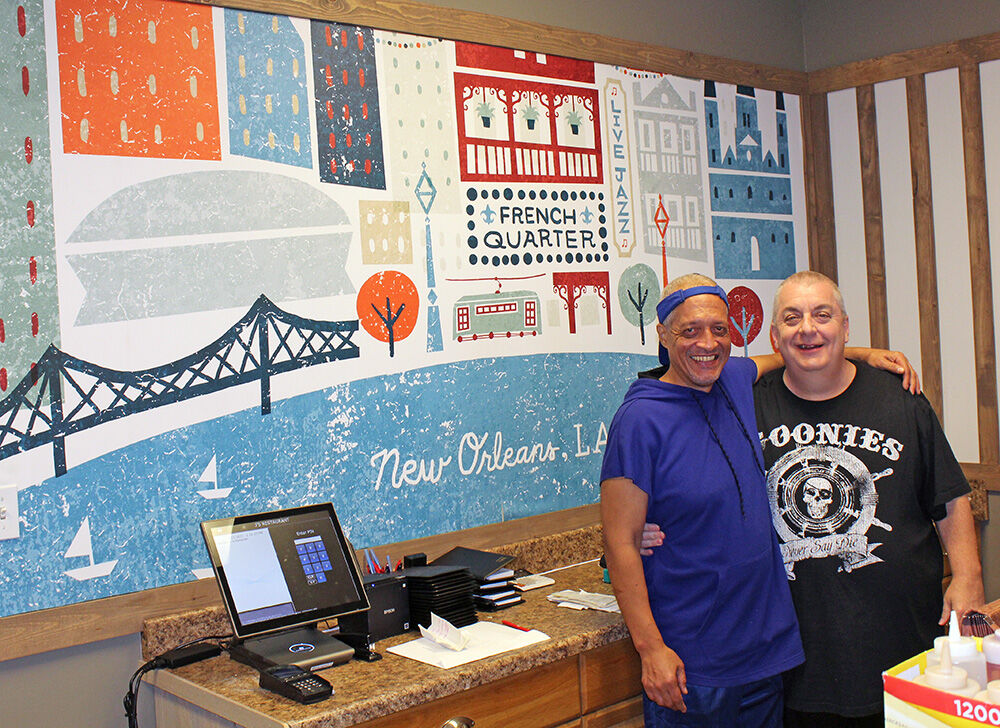 J's Restaurant line cook Florian Dedeaux and Louis Fouquet in front of one of the eatery's new murals. 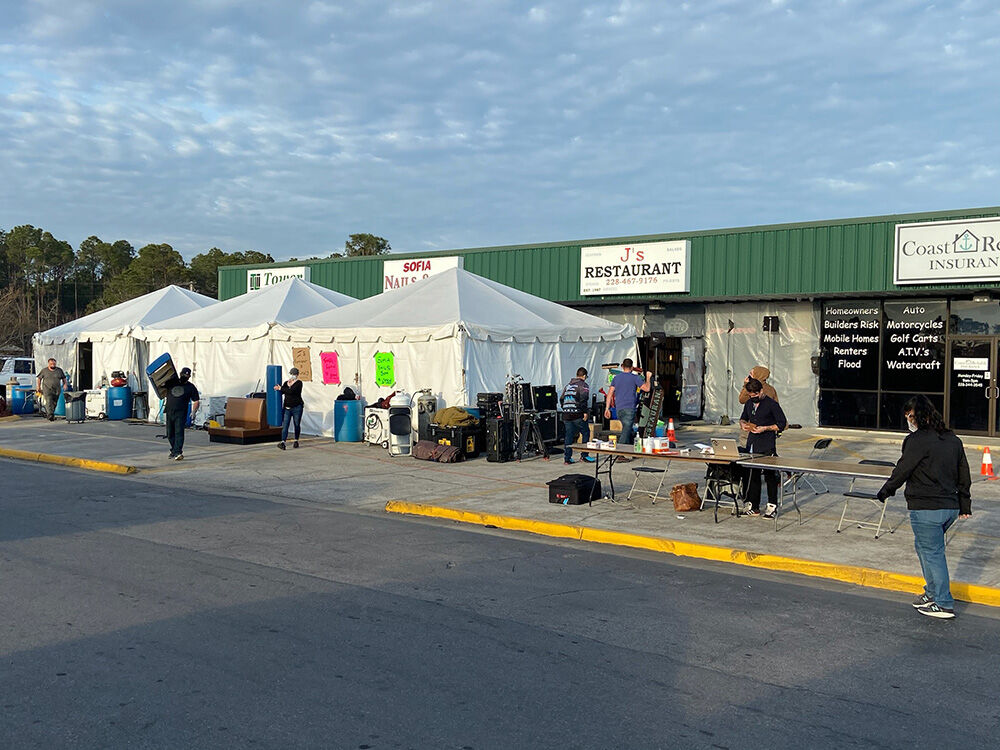 The Food Network set up tents for film crew and contractors outside J's Restaurant during filming. 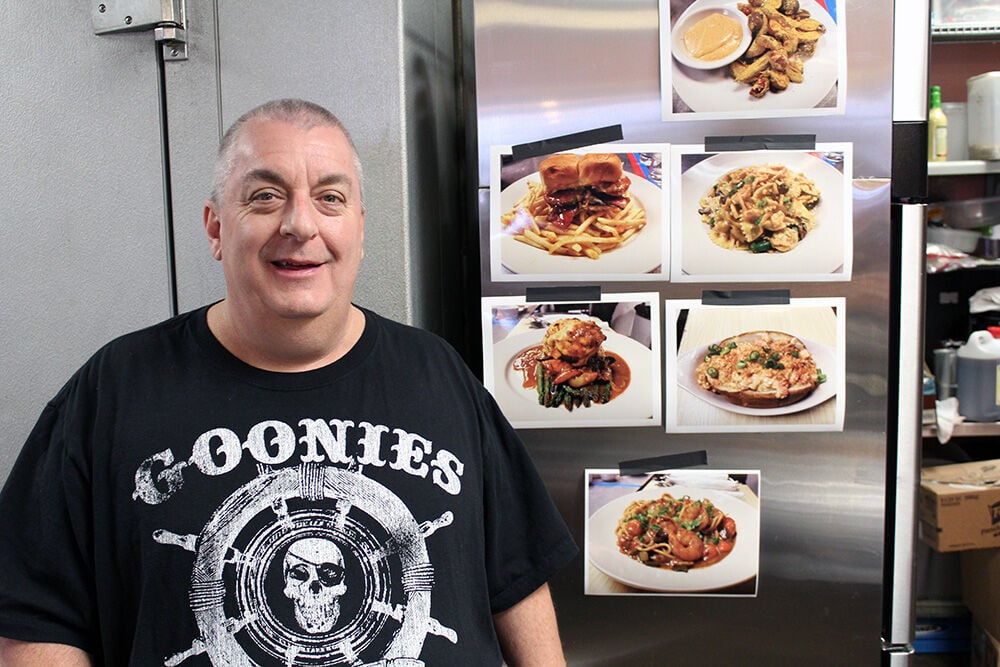 J's Restaurant owner Louis Fouquet with photos of some of the new dishes he and Chef Jeff Bui will be serving.

Waveland’s oldest eatery — J’s Restaurant — is getting some nationwide attention, thanks to the Food Network and celebrity Chef Robert Irvine.

Irvine wrapped up filming of the latest episode of his Food Network show “Restaurant: Impossible” at J’s last Wednesday.

When the J’s crew opened back up for business on Friday, they had new decor, new murals, some outstanding new menu items and “a whole new attitude,” owner Louis Fouquet said.

“With this new stuff we have here, we are going to be very successful,” Fouquet said.

“It was a once-in-a-lifetime opportunity,” long-time J’s employee Elizabeth McIntosh said. “It was exciting — it was a rollercoaster of emotion.

“I think it was a fun experience,” Kathryn Kleinschmidt, also a long-term J’s crew member, said. “We all benefited from it. We learned a lot. … It was a little humbling.”

J’s is the second-oldest continuously operating restaurant in Hancock County, behind only Shaw’s Fish House in Perkinston.

“The restaurant first opened in 1987, and when my wife (Cynthia) bought it, she was 16 years old and she ran it for 31 years,” former owner Richie Santiago said Thursday. “It was tough to walk away from it,” he said, but due to other business ventures, some health issues, and the kids all growing up, “it was time to retire. I miss the people though.

“We have a good relationship with the new owners. We sold it to them hoping they’d keep it open for another 31 years.”

Fouquet and Chef Jeff Bui took over operation of J’s in May 2019 and were quite successful early on, but the COVID-19 pandemic took its toll starting in March last year, just like it did with restaurants all across the country and around the world.

Fouquet said he reached out to Food Network via email last November when he heard Irvine wanted to film an episode of “Restaurant: Impossible” in Mississippi.

Irvine began the series on the Food Network in 2011. It ran through 2016, then returned in April 2019 after a three-year hiatus. In each episode of the show, he travels to a small restaurant somewhere in the U.S. and works with an HGTV designer and a small army of contractors to renovate and revamp and restore it to prominence in two days on a $10,000 budget.

Irvine is famously combative and uncompromising with the respective restaurants’ staff and owners, but each program ends with a “grand reopening” of the restaurant and a heart-felt speech from the show’s host.

Working with Irvine “was like a freakin’ rollercoaster,” Fouquet said. “He really pissed me off. I actually wanted to punch him at one point. … But in the end, I loved him.”

Irvine “definitely has that executive chef mentality,” line cook Florian Dedeaux — who celebrated his first anniversary with J’s on Jan. 9 — said Thursday. “You can’t tell them anything, because they already know everything, and that’s exactly what makes them successful.”

Fouquet said the whole process of filming the show and completely renovating the business so quickly was daunting, but J’s landlord John Miller “helped us out tremendously.”

Miller coordinated with the other businesses in the plaza and made sure the Food Network film crew and contractors and J’s staff had all the room and resources they needed.

“It really helps our restaurant that we have a landlord that’s willing to do anything for us,” Fouquet said. “We have an awesome landlord.”

While J’s will continue to offer its iconic po’ boys, steaks and seafood items, Irvine left the crew with some new dishes, including three which Fouquet and Bui are rolling out immediately.

“We will also have our crab-crusted sirloin steak — that’s a sirloin steak with Louisiana crab dip, crispy potatoes and a shallot cream sauce.

“And we’ll also offer our new ‘Smothered’ baked potato, which has chicken, ham, cheese sauce, toasted bread crumbs and scallions. It’s made in the oven -- no microwave.”

After closing briefly for filming and renovations, J’s Restaurant reopened to the masses on Friday, Jan. 22.

The J's Restaurant episode of "Restaurant: Impossible" is scheduled to premiere on the Food Network on April 29.