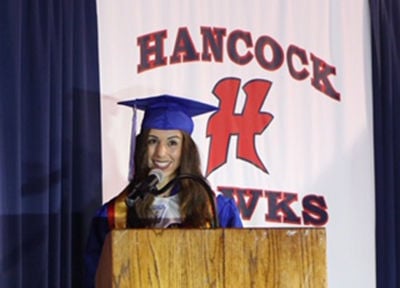 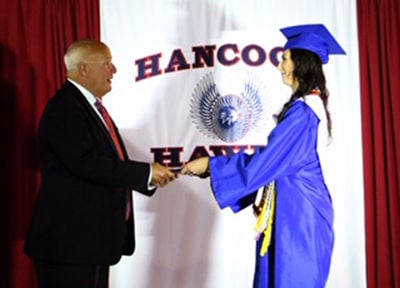 In alignment with social distancing guidelines, graduates were allowed a certain number of in attendance guests, Hancock County School District Superintendent Alan Dedeaux said. Checkpoints were set up; nurses from Ochsner checked temperatures; and family members were seated in the bleachers six-feet apart, in adherence to the social distancing guidelines set forth by the Center for Disease Control and the Mississippi State Department of Health.

The graduates were seated on the field in social distance fashion as well, he said.

“People were very cooperative,” Dedeaux said. “They helped out so much and did as we asked. It was very nice to see everyone working together.”

Ladner said that there were 295 graduating students and of that, 262 sat on the field. Some students decided to not attend and about 10 had a private graduation ceremony due to previous engagements.

“I thought it was one of our best graduations,” she said “We try to make our graduations student-centered and this one seemed quite a bit more so.”

Ladner said the ceremony was even more “touching” as the class remembered its classmate, Emily Goss, who passed away at the beginning of the school year.

“It was extraordinary and certainly our pleasure,” Ladner said. “I’m very appreciative to everyone who made this graduation so nice; the administration; the superintendent; parents; students; the nurses at Ochsner; and the Hancock County Sheriff’s Office.”

Dedeaux said he was “very excited for our students and families.” He added that he received positive feedback from those in attendance and from those who viewed the ceremony via livestream.

“It was a beautiful night,” he said. “You could see it in their faces. They were very appreciative that we were able to do a traditional graduation. Our students made it very enjoyable. The speeches from the valedictorian and salutatorian were touching and heartwarming.”