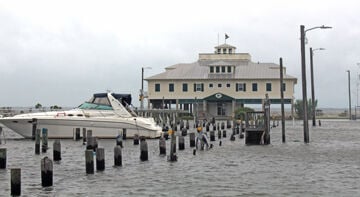 The Bay of St. Louis covered the parking lot of the Bay-Waveland Yacht Club on Tuesday afternoon. 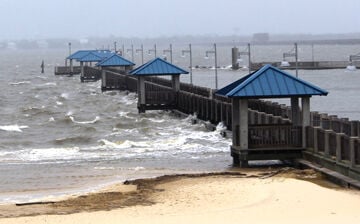 The Bay of St. Louis rose up about even with the Jimmy Rutherford Pier on Tuesday. 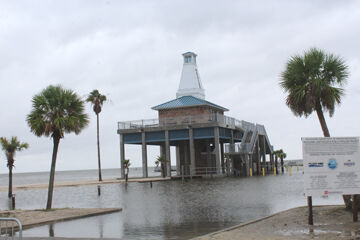 The Lighthouse comfort station at the foot of Coleman Avenue in Waveland. 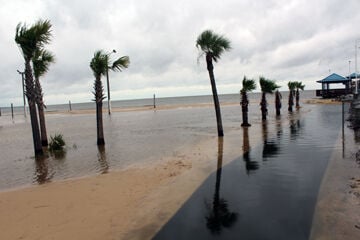 The Mississippi Sound covered most of the beach at Waveland on Tuesday afternoon. 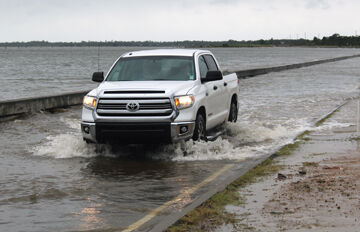 The sound covered Beach Boulevard at Buccaneer Park on Tuesday.

Although most of the businesses were closed in Old Town Bay St. Louis on Tuesday afternoon in preparation for whatever Hurricane Sally threw our way, there were still plenty of people out and about.

At a little after 1 p.m. Tuesday, The Blind Tiger was the only business open on Beach Boulevard. A few patrons sat inside, feasting on cheddar burgers and steamed Royal Reds, the doors wide open and blaring Stevie Ray Vaughan out into the street.

"Looks like we dodged another one," Kennedy Bush said just outside the restaurant.

Considering that only a day before, Hurricane Sally looked to be heading directly to Bay St. Louis as a Category Two storm and by Tuesday afternoon, it was headed instead for Pascagoula or Mobile, we did, indeed, dodge another one.

"We are so blessed," Nikki Moon said from the front yard of her Bay Town Inn, just across the street.

Moon spent much of Hurricane Katrina clinging to a Live oak tree for dear life after the storm surge destroyed her inn, so she knows a thing or two about blessings.

As of 4 p.m. Tuesday, Hurricane Sally was about 85 miles south of Mobile and 90 miles southwest of Pensacola, according to the National Hurricane Center, and the slow-moving storm was expected to make landfall somewhere near the Mississippi-Alabama state line either late Tuesday evening or early Wednesday morning.

A Storm Surge Warning was still in effect from the mouth of the Mississippi River to Ft. Walton Beach, but the storm surge forecast for Hancock County had been reduced to 2-4 feet.

But there was still plenty of water to worry about.

At 3:05 p.m. Tuesday, the National Weather Service announced a Flood Warning for the Jourdan River had been extended through Thursday, and residents in low-lying areas had lined most of Hwy. 603 with their cars. At about that time Tuesday, many of the streets at Jourdan River Shores were covered with water, although it had not yet covered the property at the Jourdan River Steamer.

In the Bay of St. Louis, the water was up about even with the docks at the municipal harbor and the walkway of the Jimmy Rutherford Pier. It also flooded the parking lot and flowed onto Beach Boulevard at the Bay-Waveland Yacht Club. The waters of the Bay frothed and crashed angrily against the century-old seawall near Dunbar Pier, flowing into the road and into some people's yards.

In Waveland, the water was up in the parking lot and picnic area at the Lighthouse comfort station and over Beach Boulevard near Buccaneer Park, and covered the entrance to Sarah's Lane.

The Hancock County School District announced Tuesday that Distance Learning classes would continue as scheduled on Wednesday, but Bay-Waveland Schools Superintendent Dr. Sandra Reed announced in a robocall to parents that classes would be canceled Wednesday since "more than 300 streets in the boundaries of our district are flooded."

Back in Old Town, though, people milled about by car, by bike, by scooter or on foot as the wind blew and the rain spit, unperturbed and resolute as the seawall against the crashing waves.