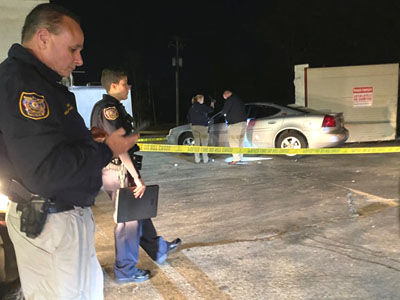 Waveland police on the scene at Keith's Superstore, where one of the stolen cars was dumped and another stolen after a shooting at Bay Park Apartments. 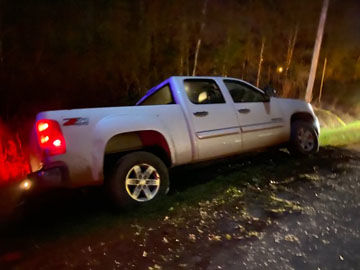 The truck apparently stolen from Keith's Superstore and dumped near a home in Bayside Park.

At least four people were shot Wednesday evening, with one confirmed dead after an attempted car-jacking at Bay Park Apartments off Longfellow Drive in Bay St. Louis. The apparent culprit has been arrested, Sheriff Ricky Adam said, turned in to authorities by his own mother.

At about 8 p.m., police responded to a report of shots fired at Bay Park Apartments. Witnesses say that two white men and a white woman were getting into a vehicle parked at the back of the apartment complex.

A witness at the scene said the woman and one of the men on the passenger side of the car were apparently shot, then he saw an African American man walk around to the driver's side, shoot the other man in the head, then pull him out and try to steal the car. However, the apparent shooter ended up taking another car instead and drove away.

A fourth shooting victim was apparently found in another vehicle in the complex after yelling for help.

One victim was airlifted to University of New Orleans Medical Center; two were transferred to Memorial Hospital at Gulfport and the woman was transported to Ochsner Medical -- Hancock Center, where she was confirmed dead, Hancock County Coroner Jim Faulk said. The conditions of the three other victims is not yet available.

Clyburn: New House panel is not about Trump

Blackwell to pastor: Do you believe in the coronavirus science?

A short while later, Adam said, deputies got a phone call that a truck had been "jacked" from Keith's Superstore at Hwy. 603 and Kiln-Waveland Cutoff Rd. Deputies were told a man approached someone pumping gas into his pickup truck, held a gun to the man's head and demanded he give him the vehicle, then drove away in it without further incident.

While deputies were en route to that scene, a woman from Bayside Park called the sheriff's office and reported her son had returned home with a shotgun and blood on his clothes, Adam said.

When deputies got to the Bayside Park home, they found what is believed to be the truck stolen from Keith's in a ditch in front of the property at West Itawamba Street. The silver car apparently stolen from the Bay Park Apartments scene was found near the Dumpster at Keith's.

Adam said the apparent shooter was arrested at his mother's home, but his identity has not yet been released.

The Sea Coast Echo will have more details as they become available.