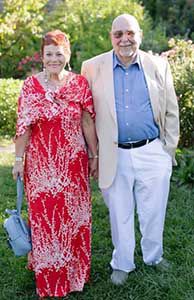 From left, LiLi Stahler-Murphy and her husband, Donald. 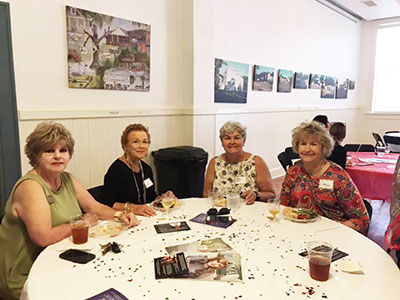 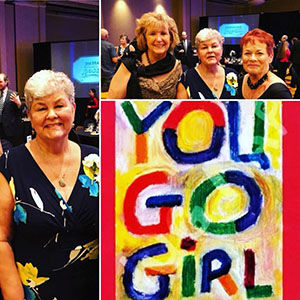 From left, LiLi Stahler-Murphy and her husband, Donald.

“She loved life, whether she was fighting over something she believed in to belly dancing with her friends at Relay for Life,” Cullen said.

Residents of the city of Waveland and Hancock County this week are mourning the loss of LiLi, who passed away on Sunday, July 12 after a battle with ovarian cancer.

“Your whole life attitude changes,” LiLi said of her cancer diagnosis in a March interview with the Sea Coast Echo. “You never really think about dying until you have a life-threatening disease.”

“That’s the greatest gift she’s given me,” she said.

During the summer, LiLi hosted a water aerobics program for the “Swimming Women.”

Kay Kell, a member of the group, said that LiLi invited her to aerobics when she learned that Kell couldn’t swim.

“I finally did go,” she said. “I sat on a water horse and did water aerobics. I just ended up in deep water and kept falling off. She told me ‘you are too high-maintenance.’ She always told you like it was.”

Her “honest” approach to life is what Waveland Ward I Alderman Jeremy Burke said made her such a good alderwoman.

From 2006 to 2014, LiLi served as a Ward I alderwoman for the city of Waveland. While she was in office, the city had to rebuild all the public buildings, streets, and sewers after Hurricane Katrina.

Former Waveland Mayor David Garcia — who served with LiLi during her tenure —  said Monday that LiLi was “very energetic, intelligent, and had one goal at heart, to move the city forward.”

Garcia said that LiLi joined him on trips to Jackson to promote Waveland and was very active in the Mississippi Municipal League.

Her legacy in Jackson still lives on, Burke said.

“When I go to Jackson to meet with state lawmakers, the questions I get asked the most is ‘How is my friend Mrs. LiLi doing?’’’ Burke said.

After moving back to Waveland, Burke said he would often walk down to city hall and attend aldermen meetings.

“I thought she did a fantastic job,” he said. “She started the ‘What’s Up Waveland’ newsletter. Anytime she was in a meeting, anytime she spoke, it was an honest and humble stance and always from the heart.”

Burke said that “you knew where you stood with her” and when she took the “bulls by the horn, there was no stopping her.”

When LiLi decided she didn’t want to run for another term, Burke said, she asked him if he wanted to run so he did.

“I was one of the youngest officials at one point in city government,” he said. “In 2013, Mrs. LiLi was so progressive. She was so supportive and open-minded to projects and policies that would move Waveland, Bay St. Louis, and Hancock County forward.”

For LaFontaine, LiLi’s legacy will be her dependability, her honesty, and her bluntness.

Burke said he also learned several lessons from LiLi, including being honest while serving in public office.

“She always said ‘nobody wants to be lied to,’’’ Burke said. “Someone can call and if you can’t help them, just tell them. They’ll be more mad if you give them false hope. She was a great Christian woman. If there was a cause she believed in, she went after it 100 percent.”

One of those causes was opening Waveland’s Ground Zero Hurricane Museum, which opened its doors in August 2013 on the eighth anniversary of Katrina.

“She got all the displays in the museum,” Waveland Mayor Mike Smith said. “She was an amazing woman, a powerhouse, and strong-headed. If she wanted it, she went after it and fought for it. We love her and she is truly going to be missed in this city.”

Back in March, LiLi spoke about being named one of Hancock County Relay for Life’s Honorary Survivors for 2020, which she said came as a “surprise and delight.”

She continued to play an active role in her community and life and said “you got to have faith and a good attitude.”

When it came to living in Waveland, LiLi said she “wouldn’t live anywhere else.”

“I love it here,” she said. “I made a vow to see the beach every day. It’s so pretty, like Heaven on Earth.”

Cullen said that she and LiLi often spoke about their “little slice of heaven.”

“We would often sit in her house and think about all we have in life,” she said. “I’m very lucky at this time in my life to have a close friendship with LiLi.”

Cullen said LiLi had a “strong faith” and that she loved St. Rose Catholic Church.

Cullen and Kell both said that LiLi encouraged them both to attend St. Rose.

“It was a part of her heart and soul,” Kell said. “She loved the music and the people there.”

Kell — who is a former city manager for the city of Pascagoula — said that she was impressed with LiLi being a “strong woman in local government.”

“As a city manager, I can always tell the difference when there is a woman on the council,” she said.

Cullen said that LiLi had a way of “bringing people together.”

“There will never be another LiLi,” she said.