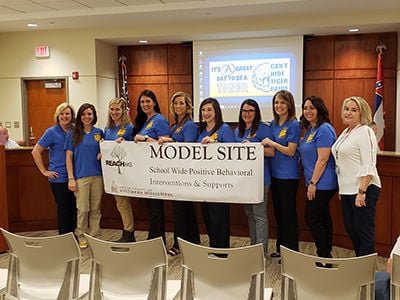 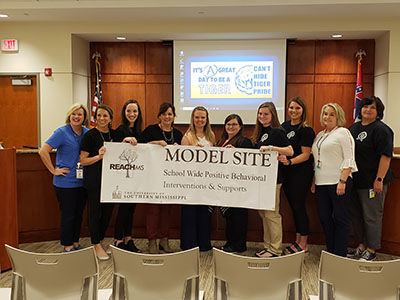 The Bay-Waveland School District Board of Trustees on Monday recognized several teachers for their roles in the district’s newest program, Positive Behavior Interventions and Support (PBIS).

Superintendent Dr. Sandra Reed that as a result of this program, the district has reached the “sweet spot of having, especially elementary schools that we’re going to talk about tonight, that are just very, very well organized in terms of policies and procedures and have a great feel and climate to them.”

Nicole Menotti, the district’s director of curriculum and instruction, said that when she first started, several teachers approached her and told her that she “had to do something about discipline.”

“I got it at every school and every level,” she said. “You can’t discipline the behavior out of the children. Because when I send them home, does that cure the behavior? Probably not.”

Menotti said her former school was one of the first model sites for PBIS in the state.

She said that you can teach a child math and reading, but “we don’t teach them how to behave.”

“So what we’re really teaching them is our expectations, how we expect for you to behave and then we’re rewarding you with praise for doing so. Let’s just be honest, everybody likes attention, whether it’s positive or negative. It doesn’t matter how you get it, as long as you’re getting attention. What we’ve found is the children that cry out for the most attention, they don’t really care if it’s positive or negative, they just want you to notice them.”

Menotti said there has been a "dramatic drop” in behavior discipline at both the elementary schools. The middle school now has the “lowest behavior referrals in the district,” she added.

Menotti said the students are rewarded with “tiger bucks.”

“The whole thing is, we want to improve behavior so we can improve academics,” Menotti said. “Because if the classroom is not well-run, then the academics are not going to happen.”

Menotti announced that Waveland Elementary and North Bay Elementary have been recognized as PBIS model sites.

“These two teams have done so well with what they’re doing that they’ve already asked them to apply for Tier 2 status,” Menotti said. “We’ve been contacted by the University of Southern Mississippi to come and do some study with us. Also, they’ve asked to start using some of the things they’ve designed in their publications and promotional things that they’re doing.”

Reed said that the PBIS group will refer other schools to visit Waveland and North Bay.

“Every time they come and visit, the receiving school gets $500,” Reed said.

Reed said that the district is working on a grant to submit to MDE to “possibly implement Pre-K as early as next year.”

“We’re taking our best shot at it,” she said. “We put together a team to write it. We’re going to write it, turn it in and see where we go from there. If we are selected for the grant, then we’re going to come back together and decide, can we really pull this together.”

Reed said that she will alert the STARS program, which is run by the Hancock Human Resource Agency, which currently houses a Pre-K program at Waveland Elementary.

“Because if we do it and start the ball, they will very definitely have to find a new home for their program because we’ll have to have the space,” Reed said.

The board also discussed the possibility of free entry to athletic events for senior citizens. Board attorney Ronnie Artigues said the board would have to adopt a policy, which has to sit in queue for 30 days, and set an age limit. The board agreed to a 65-year-old age limit and Reed said she would bring back a policy to the next meeting. The board tabled the matter until next month.

Sorry, there are no recent results for popular articles.