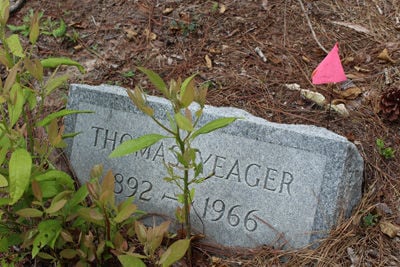 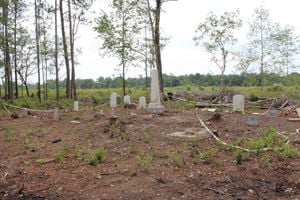 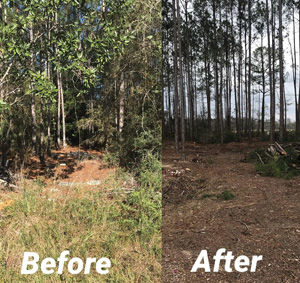 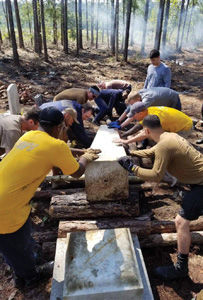 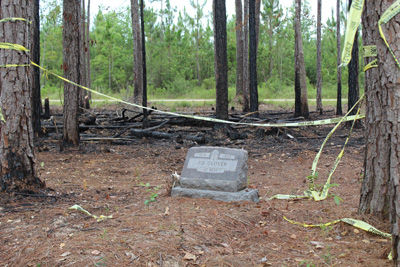 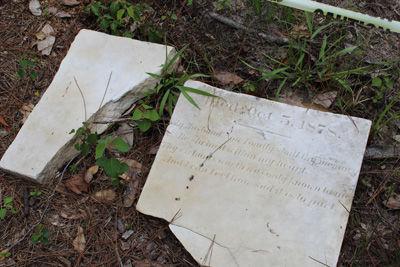 "No resting place should be in such a shape, and the people buried there deserve to be honored," Vanessa Mitchell Polk said about Spring Branch Church Cemetery.

The cemetery is located on Old Gainesville-Pearlington Road.

Polk said that prior to the creation of Stennis Space Center's buffer zone during the 1960s, a church was located near the cemetery.

The cemetery is located between Logtown and Napoleon, both former towns once located in the buffer zone, she said.

"I was only able to find the cemetery using coordinates that someone gave me," Polk said. "Pine trees and brush were growing through the graves. Bullet holes were found on one of the headstones, large amounts of straw covered the ground, and a tree had fallen and knocked a huge monument off its base."

Polk said that her interest in the cemetery stems from the fact that many of her ancestors were from Gainesville, Westonia and Logtown.

After seeing for herself the shape the cemetery was in, Polk said that something "in my gut wouldn't let it go."

Since November of last year, Polk and more than 50 volunteers have spent hours cleaning the cemetery and locating graves. Navy personnel stationed at Stennis Space Center also volunteered, she said.

"Using metal detectors, we were able to find markers that were buried underground, which led to finding two slabs and a headstone that was buried," Polk said. "One of the slabs we found belongs to Sarah Wilkinson who was married to Gen. W.H. Wilkinson and is the daughter of Gen. George Henry Nixon from Pearlington."

Through further research, Polk said she learned that some of Hancock County's first settlers are buried at the cemetery, including relatives of the Carre and Wingate families; a Gainseville volunteer war veteran; a reverend's wife; and Ambrose Gaines, who founded the Gainseville community. Polk added that they are in process of trying to locate Gaines' grave or marker.

Polk said there are about 135 people buried in the cemetery. Thirty-five of those are identified and 100 people remain unidentified, she said.

In addition to her time spent clearing the area, Polk said she has spent about $3,000 of her own money to mulch the underbrush and clear out trees.

She also started a GoFundMe account and hosted an online garage sale to purchase headstones for those graves that didn't have one or had a broken one.

However, Polk said, there is still a lot of work to be completed and she is seeking volunteers, donations, and/or companies interested in donating items, money, or clearing services.

Donations can be made through GoFundMe by logging in at www.gofundme.com and searching for Spring Branch Cemetery.

Anyone wishing to donate time, supplies, services, or monetary donations can reach Polk at 228-216-3776 and via email at vanessa.a.polk@gmail.com.