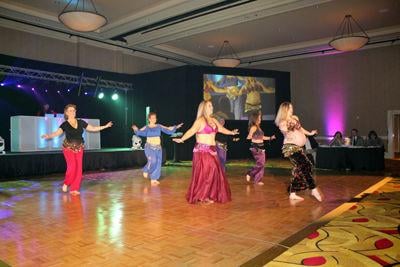 Hancock County Relay for Life on Friday kicked off this year's events at the Hollywood Casino with its second annual Dancing with the Stars.

"This was our second year and we had a great crowd come out and support our cause; to fight all cancers and help residents of Hancock County," Hancock County Relay for Life co-lead Bernie Cullen said. "We couldn't do this without the support of our community and all the people who joined us Friday night."

"I'd like to thank our first celebrity duo," she said. "They were terrific and the Relay committee is so appreciative that they put themselves out there to support Relay's efforts to fight cancer. Who will step up for the next dancing event?"

Beau Gex emceed the event and this year's competition was judged by Tish Williams, Robert Morris, and Starr Chapman.

This year's first-place and star fundraiser award went to the Krewe of Seahorse group, a non-profit organization with 280 members. The Krewe sponsors events such as the Lundi Gras parade, Pirate Day in the Bay, and the Seahorse Open putt putt tournament.

This year's second-place award went to Miyori and Crystal, both of whom have worked at Hollywood Casino for the past three years and have been friends for 27 years. The pair have danced for about that long and, on Friday, performed a dance inspired by their African heritage.

"A big thank you to our partners, Hollywood and Boomtown Gulf Coast; my co-chair Nonnie Richardson and our entire Relay committee; all the dancers our DJ Donovan Calfee; our emcee Beau Gex; and of course our judges Tish Williams, Robert Morris and Starr Chapman," Cullen said.

On Friday, Cullen also announced the honorary cancer survivors for the 2020 Relay for Life campaign; Debora Batchelor and Lili Stahler-Murphy.

"Lili is a pillar of our community," Cullen said. "She has received so many awards honoring her dedication and work to make this a better place to live. She is a survivor, warrior, and role model. She has the best attitude about life. She is an optimist and her outlook is contagious. She is generous to a fault."

Batchelor is the assistant vice-president at Peoples Bank; a three-year member of Hancock County's Relay committee; and has been named an American Cancer Society "Voice of Hope."

"In early 2014, Deb was diagnosed with cervical cancer and fought the fight for four long years," Cullen said. "She is a survivor, warrior, role model, and ambassador for others."

January is Cervical Cancer Awareness Month and Batchelor is "championing the cause," this month, Cullen said.

"One of the worst things you can hear is you have cancer," Batchelor said Monday. "Three words that can change your life forever. My cancer journey will affect the rest of my life."

In late December 2013, Batchelor said, she was up to date on her wellness checks.

"I went to my gynecologist for a hysterectomy and she found out during an exam," she said. "I had a clear pap smear in February of the same year I got diagnosed in December."

Batchelor said several signs or symptoms of cervical cancer can include heavy menstrual cycles, pain, and a bloated stomach.

Two of Batchelor's lifelong friends were recently diagnosed with breast cancer and she said that you have to be there for them and let people know "it is a fight," and you "definitely have to fight."

"You have to strive to be the survivor," she said.

Batchelor said that the American Cancer Society also helped her find temporary housing when she had to stay for two months.

As a "Voice for Hope" for ACS, Batchelor said, she speaks at events to "give people hope and encouragement and promote ACS."

"I'm an advocate for cervical cancer, but I speak for all cancers," Batchelor said. "Every cancer is important."

Batchelor said it was her faith in Jesus Christ and prayers from family and friends that got her through her diagnosis and treatments.

"I had to fight for my family," she said. "Having faith is what got me through. It hasn't been easy, but you have to do it when you hear those words."

Learn more about Relay for Life of Hancock County at www.relayforlife.org/hancockms.

Hancock County Relay for Life Dancing with the Relay Stars 2020