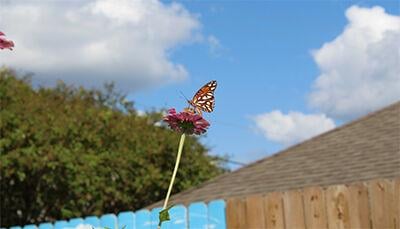 Bob McGraw’s first piece of public artwork is now on display at Ruth’s Roots community garden and also honors the victims of Hurricane Laura, which made landfall on Aug. 26 in Louisiana.

McGraw, a retired engineer and school teacher, and his wife moved to Bay St. Louis more than five years ago.

“We really love it,” he said. “We’ve settled here and I was looking for something to do in my retirement. I started to fiddle around with wood carving and one thing led to another and I started doing other forms of art and it kind of evolved into spending a lot of my time doing that.”

McGraw said he was glad to be able to contribute something to this “wonderful place.”

“We kind of discovered it (Ruth’s Roots) walking our dog, T-Bone,” he said. “It’s a place to duck in and for him to get a drink at the fish pond and just kind of relax for a minute and we just found it to be very refreshing.”

He went on to say that the garden is a “real asset to the community.”

McGraw’s mural is titled “St. Francis of the Bayou,” which came into being after his son-in-law “jokingly said that it would be really cool to render St. Francis holding an alligator.”

“I just thought that was a cool idea,” he said. “The more I thought about it, the more sense it made in terms of the legacy of St. Francis, sort of translating St. Francis into the culture of the local.”

McGraw said that St. Francis lived during the 1200s and founded religious orders focused on the poor.

“And he was known for his love of nature and animals,” McGraw said. “And there are several stories about him. About his preaching to birds and stopping a wolf from attacking a town by getting the townspeople to agree to feed the wolf. Some of them are a little fantastical, but he definitely was known as someone who had a lot of appreciation of nature. He wrote that he viewed nature as a mirror of God and that he viewed the creatures of the world as his brothers and sisters. And in 1979, Pope John Paul II declared that he was the Patron Saint of Ecology.”

There are already statues in Ruth’s Roots paying homage to St. Francis, he added.

“The opportunity arose and they were kind enough to allow me to do it here,” he said.

McGraw said the idea to dedicate the mural to the victims of Hurricane Laura was the brainchild of garden founder Elise Deano.

“Clearly, that hadn’t happened when I started on this one, but it was very timely to do that I think,” he said. “They’re still suffering and I think those in this area have a deep appreciation for the difficulties they face in recovery from that and the suffering they’ve been through. It’s not a concrete thing that is helping them, but at least it’s a way of asking people to remember them in their thoughts and prayers.”

Ruth’s Roots, named after the late Ruth Thompson, is located at the former location of Ruth’s Cakery at 130 Court St. in Bay St. Louis.

The community garden is home to chickens, rabbits, a weather station, a koi pond, waterfall, chess table, plants, and a butterfly house.

The garden also has a Little Free Library and a non-perishable food bank.

St. Francis of the Bayou