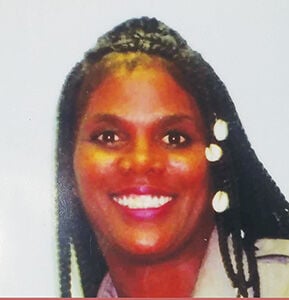 Constance Joseph, Michael’s mother, passed away from colon cancer in 2012. She is the inspriation behind his non-profit, Constance Cares for Cancer. 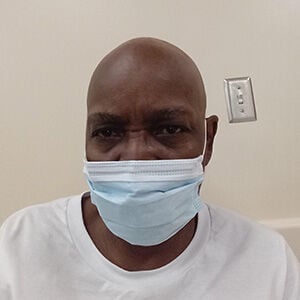 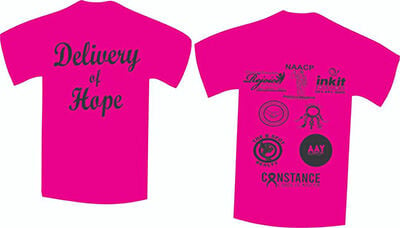 The shirts for the Car parade for cancer awareness, scheduled for Oct. 24 at 10 a.m. beginning at MLK Park on Herlihy Street in Waveland.

Constance Joseph, Michael’s mother, passed away from colon cancer in 2012. She is the inspriation behind his non-profit, Constance Cares for Cancer.

The shirts for the Car parade for cancer awareness, scheduled for Oct. 24 at 10 a.m. beginning at MLK Park on Herlihy Street in Waveland.

Michael has truly been a blessing to me,” Elaine Parker of Bay St. Louis said. “He does it from his heart. Love is an action word. And if you don’t show it, it is in vain. People throw that word around so easily.”

The Michael that Elaine speaks of is Hancock County native Michael Joseph. In addition to his real estate job in Texas, he is also the founder of Constance Cares for Cancer.

Michael’s mother, Constance Joseph of Waveland, passed away in 2012 from colon cancer.

Long before his mother became ill, Michael vowed that, once he found his own success, he would return to his hometown and give back.

He has done that in the form of backpack giveaways during back-to-school months and now, through Constance Cares for Cancer, he provides financial support for local families battling cancer.

Prior to his mother’s illness, Michael said, he never realized the full extent of the struggles and burdens associated with not only the cancer treatments themselves, but also finding reliable transportation and lodging for those who seek treatment at MD Anderson in Houston.

“I wanted to take our pain and turn it into a passion, and impact other lives with the same struggle,” Michael said.

In addition to raising funds, Michael also drives from Houston to Hancock County to pick up patients like Elaine and take them back to Houston for their treatments.

Back in April of this year, doctors told Elaine she had stage 2 lung cancer.

She said that her insurance would not cover some of her treatments. For about a month, she went to doctors in Biloxi and Ocean Springs, who she said were seeing her, but not treating her.

“A friend of mine went to MD Anderson in Houston and I asked the doctors here to refer me there,” she said.

Elaine said her younger brother, after working 12-hour shifts, would pick her up and make sure she got to Texas for appointments.

In one month, Elaine said, she underwent 30 rounds of radiation for three weeks in a row, two times a day.

To help offset some of her medical costs, the members of First Missionary Baptist Church in Pass Christian hosted a benefit for Elaine.

When Michael came home for a visit, Elaine said, someone told him she had cancer.

“His mom and I were friends,” Elaine said. “I hadn’t seen him since he was a baby. God puts people in our lives for a reason. He’s a man now, but he’s still a child to me. This young man is sticking by me. He wanted to take some of the burden off my family.”

Elaine said her cancer has been a struggle, but her family and the community have come together to help her.

Elaine is no stranger to helping others; she said she used to host benefits for community members in need.

“My ministry is helping,” she said. “I don’t want a pity party. I ask the Lord what his will is and it’s up to me to do it. At times, I sit and cry, but I don’t question God. I still have my faith.”

Elaine will return to Houston in November and she said she is hoping for good results.

“I wouldn’t wish this on my worst enemy,” she said. “This cancer is real and people really need to take it seriously. Cancer doesn’t discriminate. There are so many people going through this.”

When it comes to Michael’s service to his hometown, Elaine said, his mother would be so proud.

“He helps this community,” she said. “He loves to help people.”

Constance Cares for Cancer is collaborating with Helping Hands-Waveland; Retrofit-Bay St. Louis; and the Hancock County NAACP to host a car parade for cancer awareness on Sat. Oct., 24 from 10 a.m. to 2 p.m.

“COVID-19 will determine the interaction at the park in Bay St. Louis, taking into consideration those who are on chemo and radiation treatment with a higher risk of getting an infection because white and red blood cells are in a rebuild state,” Joseph said.

After the parade, Constance Cares for Cancer will present checks to families in need to help cover medical and personal expenses related to cancer treatments, Joseph said. Proceeds are evenly distributed amongst families.

“We ask that anyone who has won the battle with cancer or even lost someone to it to decorate your vehicle and join us in the parade in memory of your loved one,” Joseph said. “We encourage those who have won to share your testimony with those in the midst of the storm to give them hope that, with God’s help, they can overcome this battle as well.”

Learn more about Constance Cares for Cancer through Facebook; Constancecaresforcancer.org; and constancecares4cancer@gmail.com.