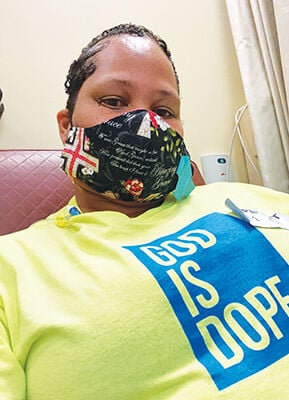 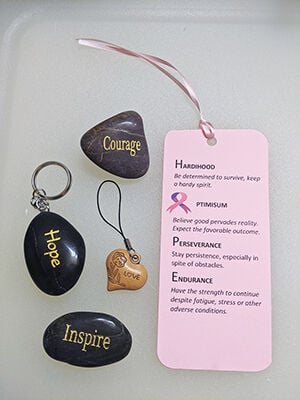 Members of Retrofit will be handing out these handmade inspirational items during Saturday’s parade.

Members of Retrofit will be handing out these handmade inspirational items during Saturday’s parade.

This Saturday, Oct. 24, Retrofit, the Hancock County NAACP, and the Waveland Helping Hands Community Organization are joining the non-profit Constance Cares for Cancer to sponsor a car parade for cancer awareness.

Retrofit event planner Sandra Price said her group decided to get involved because there are so many people affected by cancer, including Price, who said her mother passed away from cancer.

“Our organization is a giving back organization,” she said. “We help where there is a need.”

Retrofit does just that with “Delivery of Hope,” which comes in the form of a kind word; a visit; a card; a phone call; or a food basket, Price said.

“We deliver hope to individuals,” she said.

In preparation for Saturday’s parade, the group is making inspirational bookmarks and keychains with messages of encouragement and inspiration, Price said.

“I know when people receive it they get excited,” she said. “We want to deliver hope into people’s lives and for them to know that they’re not alone. We should be able to help others going through the same thing and get rid of the stigma of not telling people they have cancer. We want them to know that they aren’t fighting alone. That’s the hope we are trying to relay.”

His mother, Constance Joseph of Waveland, passed away in 2012 from colon cancer.

Long before his mother became ill, Michael vowed that once he found his own success, he would return to his hometown and give back.

Deanna Harris of Waveland is one of the recipients of goodwill from Constance Cares for Cancer.

In 2013, Deanna said she began experiencing blood clots in her legs. After numerous rounds of testing, blood work, and a visit to an orthopedic doctor, Deanna said, she continued to have problems with blood clots and blood loss, but no diagnosis until a doctor saw something that he “didn’t like” on a CAT scan of her stomach.

After a biopsy, Deanna was diagnosed with ovarian cancer. Doctors sent her to Mobile, Alabama for further testing and exploratory surgery, where she learned that the cancer was confined to her left ovary.

She underwent six rounds of chemotherapy.

In December 2013, her levels increased again and doctors performed a hysterectomy and then diagnosed her with uterine cancer as well.

After the surgery, Deanna had six rounds of radiation treatment and remained in remission for four years, she said.

In 2018, she had another biopsy of nodules in her neck and learned they had cancerous cells in them, she said.

Her cancer had returned.

“I went through radiation again and had an allergic reaction to it,” she said. “It threw me into steroid-induced diabetes. They stopped regular treatment and put me on another drug which didn’t agree with me either. They were trying everything possible to make it work.”

Deanna said that if she has to stop her current treatment, there’s “nothing else I can go on.”

The first time she was diagnosed with cancer, Deanna said, it was Stage 2, it is now Stage 4.

Through Constance Cares for Cancer, Deanna said, the organization has helped her financially. She is able to travel back and forth from her treatments.

“He takes me to my flights and puts money in my pocket to hold me over while I’m there,” she said.

Deanna, who recently turned 39, said she is unable to have children, but does have an adopted daughter and a grandchild.

“God has been my strength,” she said. “Without him, I don’t know where I would be. I surround myself with positive people and block the negative things out.”

Deanna said her doctors consider her to be in remission as of now, but there is no cure for her illness.

“It’s heartbreaking to me,” she said. “But I’m still here. I’ve got another chance at life and I hope for the best.”

After the parade, Constance Cares for Cancer will present checks to families in need to help cover medical and personal expenses related to cancer treatments. Proceeds are evenly distributed amongst families.

“We ask that anyone who has won the battle with cancer or even lost someone to it to decorate your vehicle and join us in the parade in memory of your loved ones,” Joseph said. “We encourage those who have won to share you testimony with those in the midst of the storm to give them hope that, with God’s help, they can overcome this battle as well.”