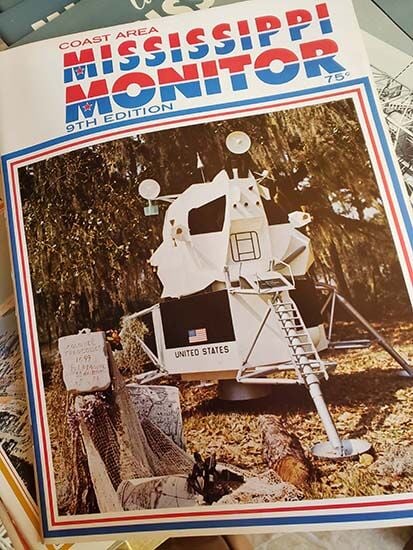 The Mississippi Monitor, published by the Ducombs. 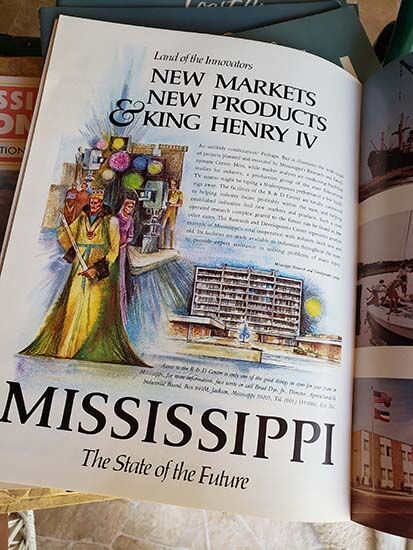 An example of Nelwyn's design work for the Ducomb's publication. 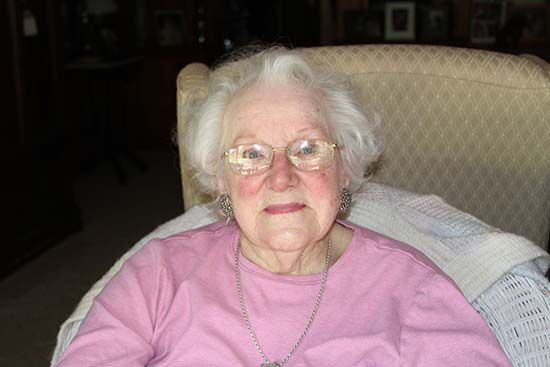 Nelwyn Ducomb of Hancock County will celebrate her 100th birthday this Saturday, April 10. 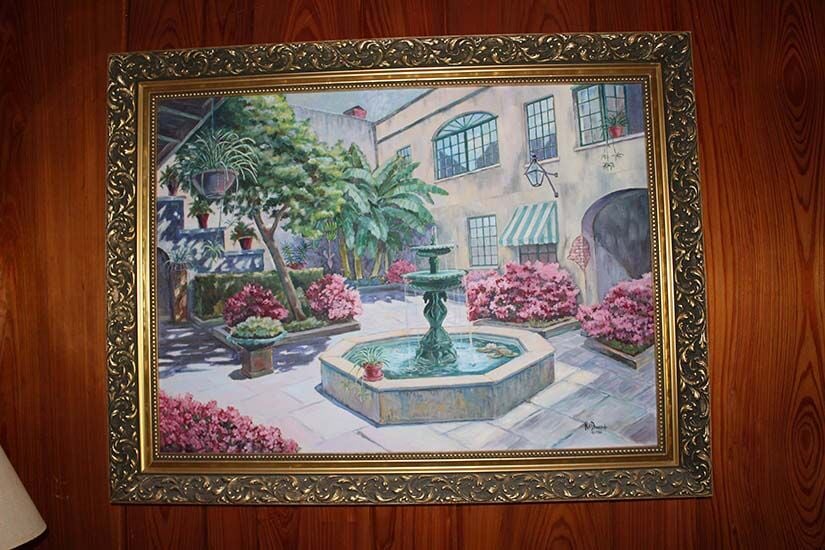 Another example of Newlyn's artwork. 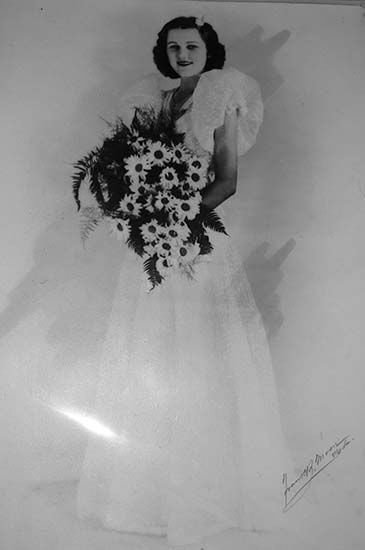 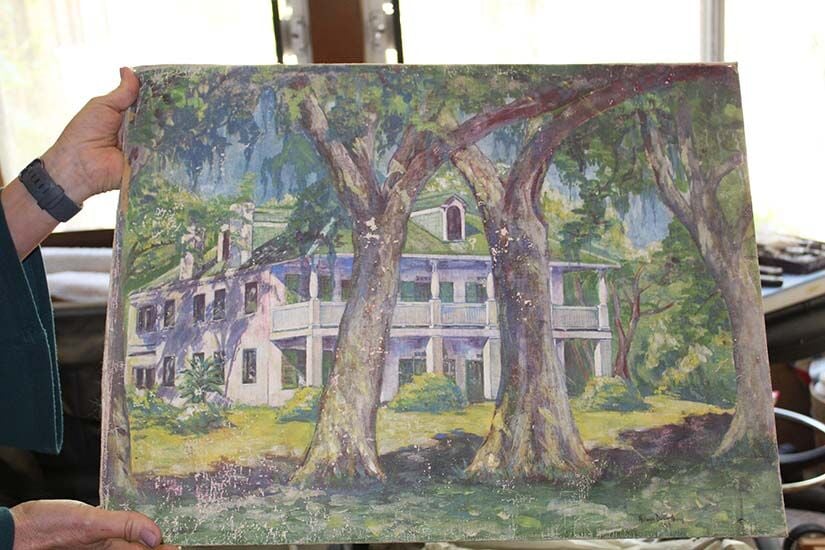 Nelwyn's portrait of a home on Beach Boulevard. 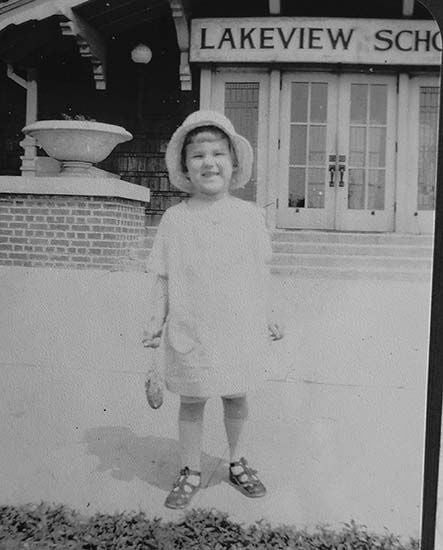 Nelwyn standing in front of Lakeview School in New Orleans, which she attended as a child. 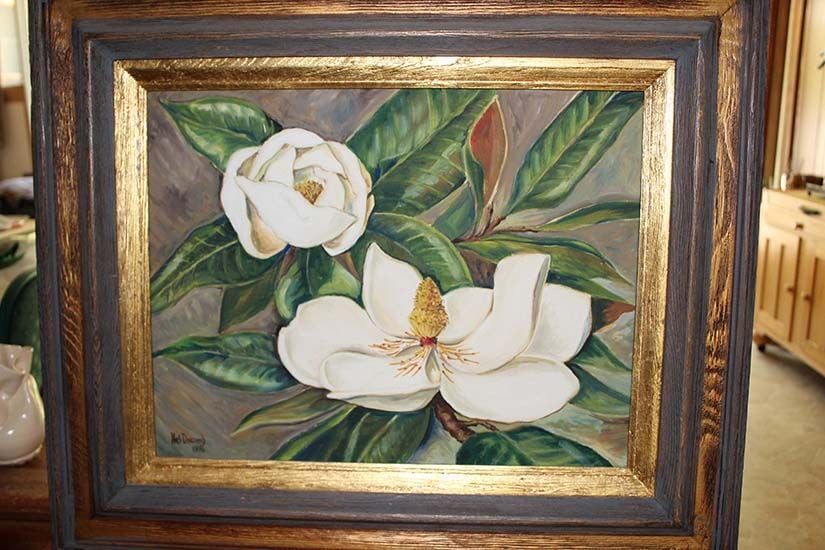 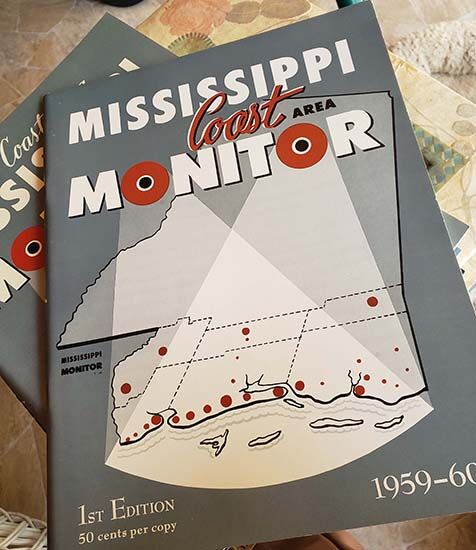 Nelwyn and her husband Wayne published the Mississippi Monitor. 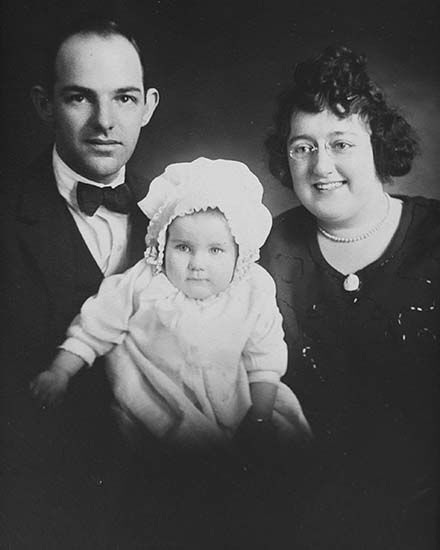 An infant Nelwyn and her parents. 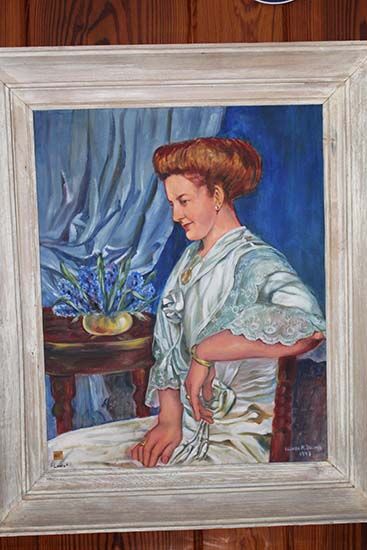 Nelwyn painted this portrait of her husband Wayne's mother. 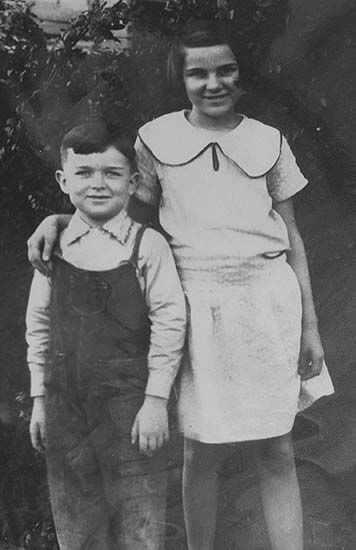 From left, Sammie and Nelwyn. Sammie, Nelwyn's brother, passed away from polio at 8-years-old. 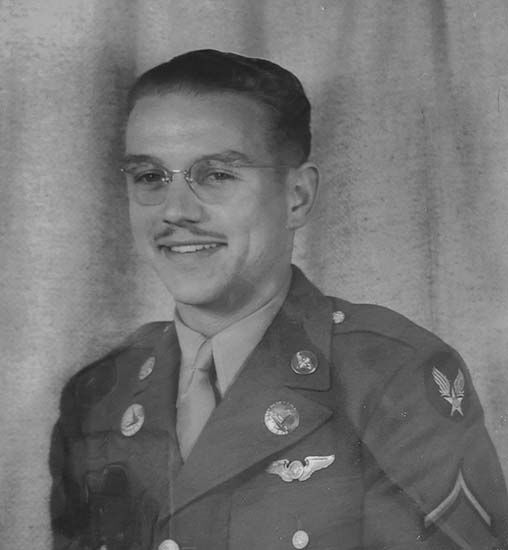 Nelwyn's husband Wayne was a member of the Army Air Corps. and served in the South Pacific during World War II.

The Mississippi Monitor, published by the Ducombs.

An example of Nelwyn's design work for the Ducomb's publication.

Nelwyn Ducomb of Hancock County will celebrate her 100th birthday this Saturday, April 10.

Another example of Newlyn's artwork.

Nelwyn's portrait of a home on Beach Boulevard.

Nelwyn standing in front of Lakeview School in New Orleans, which she attended as a child.

Nelwyn and her husband Wayne published the Mississippi Monitor.

An infant Nelwyn and her parents.

Nelwyn painted this portrait of her husband Wayne's mother.

From left, Sammie and Nelwyn. Sammie, Nelwyn's brother, passed away from polio at 8-years-old.

Nelwyn's husband Wayne was a member of the Army Air Corps. and served in the South Pacific during World War II.

“I’m so delighted I’m going to be 100-years-old,” Nelwyn Ducomb of Hancock County said of her upcoming April 10 milestone.

“I have so much noteworthy material crammed into my brain that it has just exploded,” Nelwyn said.

She was born and raised in New Orleans to Samuel and Angeline Moivant.

Nelwyn said the family lived in the suburb Lakeview. She remembers that there were a lot of children in that area and she had a “lovely” childhood.

A vivid memory for Nelwyn is the Flood of 1927. She was six years old at the time. The family raised chickens and rabbits and she also had her own pet chicken, Rosie, who lived in an unfurnished bedroom of the home.

“I didn’t want to play with the neighborhood children anymore, I played with Rosie,” she said.

During the flood, Nelwyn said, she took a large Easter egg, gifted to her by an aunt, and broke it in half.

“My daddy was trying to get the chickens in safe,” she said. “So nobody paid any attention to me. Nobody cared about little Nel.”

Nelwyn said she found an ice pick to make a hole and a long piece of string.

“I put a string in my beautiful Easter egg and I floated it around,” she said.

The COVID-19 pandemic is not the only one that Nelwyn has faced.

Every summer during her youth, she said, there was an epidemic of polio.

“It had been going on for years,” she said.

It would be 20 years before a polio vaccine was available.

“That’s surprising that medicine had traveled so slowly to get something so necessary,” she said.

Nelwyn lost her little brother, Sammy, to polio in 1932. He was eight years old.

“He was a dear little boy,” she said. “He was in the hospital and they were trying to restrict cases and keep families from visiting, and he kept saying ‘I want my Daddy.’ And so my Daddy went and stayed with him until he died.”

“Those were such hard years and I never heard anybody complain,” Nelwyn said. “No beggar ever came to the door that my mother didn’t make him some kind of a sandwich and give him something to drink. It was really bad, that Depression. We didn’t have anything, but my mother always found something to give them. She put margarine on the bread or if she had anything better, she would always give them something of the best we had to eat. She was very soft-hearted.”

The Artist and the Times-Picayune

As a result of the Depression, Nelwyn said, she needed to obtain a job quickly.

She got a job in the art department at the Times-Picayune newspaper. She described the people as “lovely.”

“I really enjoyed being there,” she said.

Nelwyn said she would go to the local department and grocery stores and sketch what the clients wanted for their advertisements.

She sketched cakes at Solari, an upscale food seller, and clothing at Godchaux’s.

“It was fun to go to Godchaux’s to see a beautiful gown, a ball gown, and that’s what I had to sketch,” she said.

She said that she used to eat lunch at Solari every day and got a discount because they recognized who she was.

She worked at the Times-Picayune for about two-to-three years.

Every Sunday, Nelwyn said she would visit her “uptown” grandmother for dinner.

“She was the dearest thing,” she said.

Nelwyn said that several of her school friends also visited her grandmother, including her future husband, Wayne.

Wayne had moved to New Orleans to live with his aunt and uncle after his parents’ death.

She said that Wayne attended Delgado where he studied aerospace engineering. A mentor told him that, in order to gain more knowledge, he should attend Curtiss-Wright Tech in California, known as the best engineering school in the country, she said.

“That was wonderful,” she said. “He drove across the country slowly.”

During the trip, the couple stayed at a hotel, and the man who took care of the grounds also made funny voices such as Bugs Bunny and the other various Warner Brothers characters.

Turns out it was Mel Blanc, the voice actor. He and his wife owned the hotel.

Nelwyn said the couple found a nice rental home, but not long after, Wayne was sent to serve in World War II.

He joined the Army Air Corps, which later became the Army Air Force. Wayne was a flight engineer and flew the South Pacific.

Nelwyn said that during the war, there were blackouts, when the sirens would go off and all day long there were barrage balloons.

During the early 1940s, Nelwyn was pregnant with the couple’s first child, but that didn’t stop her from serving her country.

“I was an air raid warden,” she said. “I was very pregnant. I was given a shovel and a bucket of sand and I was shown how many lots I would have to watch out for. I thought that was so exciting. If there was a bombing with falling shrapnel, the wardens would have to dump sand on anything that was burning.”

Another fond memory for Nelwyn is the fact that she could look down into 20th Century Fox’s studio.

“I could see the activity going on,” she said.

One such memory involved Carmen Miranda.

“She had a rooster and she lived in Santa Monica,” she said. “She would come down from Santa Monica, which was on the beach, and she would have her rooster in the basket of her bicycle. She would ride down the boulevard.”

She knew Nola Hahn, owner of the Savoy restaurant.

“Every night, he brought me ice cream from his restaurant,” she said.

A Voice for Hancock County

When his plane was in Colorado, Wayne injured his back after slipping off the icy wing of the plane. Due to that injury, he left the military.

Wayne recovered at the military hospital in Dallas, Texas and the couple moved back to New Orleans after he was discharged.

The Ducombs decided they wanted to get out of the city and moved to Bay St. Louis in 1947 and lived on Leonhard Ave.

“I had lovely neighbors, it was a lovely neighborhood,” she said. “I could walk with my little one down to the beach, which was just a half a block away.”

They lived in Bay St. Louis for about three years before moving to and building a home in Kiln.

“We pretty well knew that the McDonalds, who owned the hardware and lumber store, were good,” she said.

“It was something we knew,” she said. “We knew how to sell advertising.”

The annual publication was completely supported by advertising.

The magazine covered the six coastal counties and a different location would be featured on the front cover.

“In addition to the articles about the city and counties, there would be a feature article on whatever it was that was on the cover,” her daughter Nel said. “The featured organization would obtain copies and send them for promotional purposes.”

As far as being so involved in the community, Nelwyn said, “Well, I had a business, and to support a business, I had to be recognized and appreciated for what I was doing in the publishing line.”

In addition to designing the ads for their publications, Nelwyn also completed graphic design work for people who needed letterheads, logos, business cards, and brochure designs.

The Ducombs also published the Manifest magazine, which was commissioned by the Port of Gulfport. For a couple of years, the couple had the Southeast Mississippi Monitor, which covered Forrest and Lamar counties.

Nelywn did the layout, design, and illustrations for the magazines.

She has this advice for younger generations in the work force, “If you have an idea that appeals to you, this is something for you to do for yourself. You think it out pretty well, then see about making a test run in some way.”

Nelywn is also an artist, but doesn’t paint much anymore. She said she is content to sit with her dog and cats.

“I figured I’ve done my time,” she said.

Her daughter, Nel, said that her mother paints out loud now.

“She’ll look at the trees and say, ‘now look at that tree,’’’ Nel said. “She’ll start naming the paint colors, like the tubes of paint.”

Nelwyn said she thinks of things in terms of “warm and cool colors.”

“The greens out there today are brilliantly warm,” she said. “And the trunk of this palmetto palm right here is very cool. And I have fun just comparing in different weather situations what they are.”

Nel said her mom says three Rosaries a day, takes in the views of their surroundings, and is happy all the time.

“It’s wonderful,” Nelwyn said. “This is too wonderful for words. And I say, thank you God, I love this, don’t make me move for any reason.”

Nelwyn also shared her own secret to longevity.

“Chocolate, and lots of it,” she said.